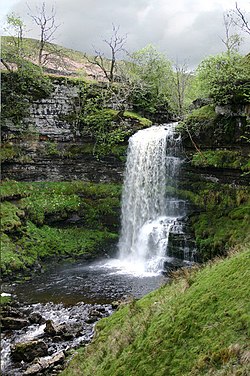 Uldale Force on the Rawthey

The River Rawthey is a river in the West Riding of Yorkshire, which forms the part of the border between that county and Westmorland, before becoming confluent with the River Lune.

From Baugh Fell, the Rawthey flows northwards and picks up the waters of the Whin Stone Gill in Uldale before skirting round Bluecaster (a subsidiary summit of Baugh Fell), after which the river moves south-by-south-west through Cautley.

The Rawthey is joined by the Clough River, coming from Garsdale, near Dowbiggin, and, having run past Castleshaw Tower, the River Dee close to Sedbergh.

A little below Sedbergh, the Rawthey joins the Lune, at Stangerthwaite.