Sedbergh (sɛdbər) is a small town in the West Riding of Yorkshire, in the north-western corner of the riding in the dale of the River Rawthey at the foot of the Howgill Fells and close to the border of Westmorland. The town sits just within the Yorkshire Dales National Park.

Sedbergh is at a meeting of waters cast off the high fells. Just to the east of the town the River Clough comes out of Garsdale to join the Rawthey. Just below the town the River Dee joins it, and very soon, two miles from Sedbergh, the waters pour into the River Lune and into Westmorland.

Sedbergh has a narrow main street lined with shops. From all angles, the hills rising behind the houses can be seen. Until the coming of the Ingleton Branch Line in 1861, these remote places were reachable only by walking over some fairly steep hills. The railway to Sedbergh was closed in 1965.

East of Sedbergh the A684 climbs up Garsdale to Garsdale Head and over the watershed into Wensleydale, down to Hawes while the A683 drive northeast up the Rawthey in the narrow pass between Brant Fell and Baugh Fell ultimately out to Edendale. From Sedbergh, 10 miles west lies Kendal and about the same from distance south is Kirkby Lonsdale.

Sedbergh's parish church dedicated to St Andrew dates from the 12th century, though restored periodically since then.

George Fox, a founder of the Religious Society of Friends (Quakers), spoke in St Andrew's Church (which he called a "steeple house") and on nearby Firbank Fell during his travels in the northern counties in 1652. Briggflatts Meeting House was built in 1675. It is the namesake of Basil Bunting's long poem, Briggflatts (1966). Sedbergh School is a co-educational boarding school in the town.

St Gregory's Church is a redundant Anglican church situated on the A684 road about a mile and a half to the west of Sedbergh. It has been designated by English Heritage as a Grade II listed building and is under the care of the Churches Conservation Trust.

Ingmire Hall, from the south

There is at least one house in the village dating from the 14th century, and there are the remains of a motte and bailey castle believed by some to date from Anglo-Saxon times.

Sedbergh's main industries for many years were farming and the production of woollen garments. Wool was taken to mills where it was turned into yarn from which people in their homes knitted clothing, including hats and socks. The garments were sold by local merchants to, among other places, the coal miners of Lancashire. This trade has long since disappeared. It is remembered at Farfield Mill, just outside the town, where there is an exhibition of weaving equipment, and workshops for a number of artists and crafts workers.

Income now comes from a range of sources. The schools are the main employer in the town, but Sedbergh has also promoted itself as “England's book town” in imitation of Hay-on-Wye and Wigtown. Independent bookshops and dealers operate from the Dales and Lakes Book Centre. It is now possible that the turnover of small to medium manufacturing and wholesale companies matches or exceeds that of the schools, so it is an important and growing feature of the economy. Other major sources of income are farming, retail and tourism.

The town golf club is located at Catholes-Abbott Holme.[1] 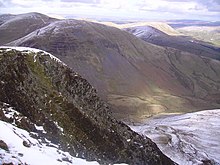 About two miles west of the town, near Marthwaite, Ingmire Hall comprises the remains of a 16th-century house, incorporating a pele tower, altered and enlarged in the 19th century by Kendalian architect George Webster[2] and again in 20th century. The hall was partially destroyed by fire in the 1920s but was extended and partially remodelled in 1989. The property is built of coursed rubble with quoins and has slate roofs. Although the hall is within private grounds, there is a public footpath running alongside the drive-way.[3]

The landscape around Sedbergh is dominated by the mountains. The Howgill Fells, in Yorkshire and Westmorland, are dramatic hills. Rising out of the north of the town is Brant Fell, with a number of summits and forbiddingly steep slopes rising to 2,205 feet at Brant Rig Top, while to the west the broad dome of Baugh Fell reaches 2,224 feet. Aye Gill Pike, between Garsdale and the Dee, rises to 1,824 feet.