Flag of the West Riding of Yorkshire 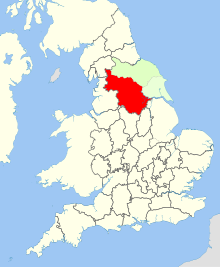 West Riding of Yorkshire within England 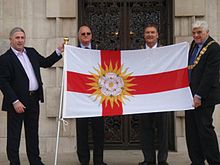 The West Riding flag was unfurled on May 23rd 2013 outside the Civic Hall, Millennium Square, Leeds at a ceremony attended by Councillor Bernard Bateman, Chairman of North Yorkshire Council, Councillor Alan Barry, Chairman of Cumbria Council and Councillor Claude Mole, the Chairman of the East Riding of Yorkshire Council. The flag was unfurled by Councillor Bateman and Andy Strangeway, organiser of the West Riding flag competition. Several local dignitaries sent messages of support including; Mayor of Calderdale, Councillor Ann Martin, “With regret, I am unable to attend the West Riding flag unfurling ceremony in Millennium Square, Leeds, however, I am delighted to send greetings from Calderdale on this occasion.”; Civic Mayor of Doncaster, Councillor Christine Mills: “I wish you success with your flag unfurling”; Lord Mayor of Leeds: “Sends his best wishes and hopes your event is successful”; Mayor of Oldham: “It is with regret that I am unable to attend the unfurling of the West Riding Flag. May I take this opportunity, on behalf of the people of Oldham, to send best wishes for what I am sure will be a wonderful occasion.”; Deputy Mayor of Rotherham, Councillor Barry Dodson: “Best wishes to you for a successful and enjoyable event”; Lord Mayor of Sheffield, Councillor Vickie Priestley: “I am sorry that I cannot be with you today for the unfurling of the first West Riding flag but send my best wishes to all involved in this special event for a successful and enjoyable day.”

The flag was created by noted British vexillologist Michael Faul from York and was the winning entry in a popular vote organised by local resident and campaigner Andy Strangeway, in cooperation with the Flag Institute. The motivation behind the competition and creation of the flag was to reaffirm the existence of the West Riding of Yorkshire as an entity in its own right and a traditional constituent part of the wider county, following decades of ever changing administrative arrangements which had threatened recognition of this ancient division of the county of York. The flag had previously been intended as a flag for the whole county but having been unsuccessful in this venture and given its similarity to the arms borne by the former West Riding council it was felt appropriate to submit the design to the new competition.

The flag features a "rose-en-soleil" device first used by Edward IV upon his accession to the throne, combining the White Rose of the House of York with the Sun emblem used by his royal predecessor, Richard II. In essence the rose-en-soleil is a more elaborate version of the white rose emblem associated with the county and had been used by the former West Riding council in its coat of arms. The rose emblem is placed against an offset red cross in Scandinavian style, reflecting the Anglo-Scandinavian history of the region during the era when the Ridings were first established. The cross may be seen therefore as a Nordic cross in English colours, as a graphic encapsulation of local heritage and history.