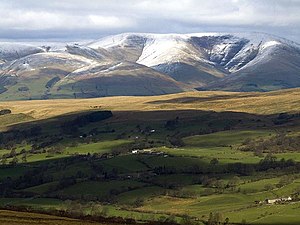 The Howgill Fells are a small range of hills on the borders of Yorkshire and Westmorland, where the Pennines meet the Lake District fells at the top of the Yorkshire Dales. The fells lie roughly in between the vertices of a triangle made by the towns of Sedbergh, Kirkby Stephen and Tebay, and are much appreciated by travellers on the motorway and railway passing through Lonsdale.

The name 'Howgill' is from the Old Norse word haugr meaning a hill or barrow, plus gil meaning a narrow valley.[1]

The Howgill Fells are bounded by Lonsdale, the dale of the River Lune, to the west, to the north by upper reaches of the Lune, and to the east by the River Rawthey. The M6 motorway runs through Lonsdale at the west side too.[2][3]

Unlike the Carboniferous Limestone Yorkshire Dales they are made of Ordovician and Silurian slates and gritstones.[4]

Parts of the southern Howgill Fells lie within the Yorkshire Dales National Park.

Howgills from the A684 into Sedbergh from Kendal 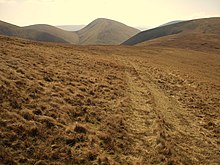