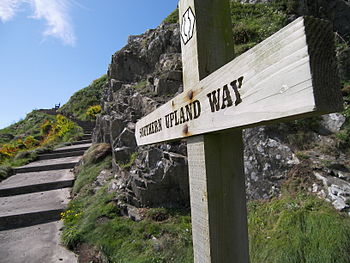 The start of the Southern Upland Way in Portpatrick 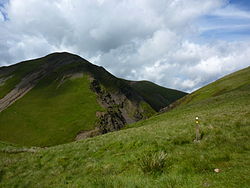 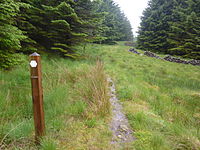 The path in the forest

The Sir Walter Scott Way runs through the shires along the Tweed and like the Soutyhern Upland Way it visits St Mary's Loch, Traquair, Galashiels, Lauder and Longformacus.

The Annandale Way[1] running through Annandale from the source of the River Annan to the sea meets the Southern Upland Way briefly at Beattock.[2]

In the Lammermuir Hills, near Longformacus close to where the Way crosses the Watch Water, is John Dippie's Well. The well is marked by a carved stone "headstone" which tells that there is no sweeter water in the Lammermuir Hills. John Dippie was a gamekeeper and the reason the water was so sweet was that he added some whisky to it before the thirsty shooting parties slaked their thirsts. The "headstone" marks their appreciation.

The Middle Shires have many long distance routes through their rough fells, and amongst them are: