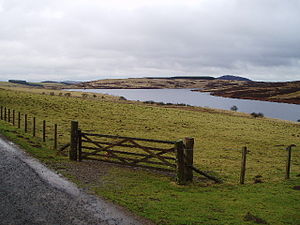 The Dye Water flows into the Whiteadder Water, which in turn is a tributary of the River Tweed.

Watch Water Reservoir is a man-made reservoir, located approximately halfway along the river's course, around two miles from Longformacus and seven and a half miles from Duns. It extends to 121 acres, and is formed by an earthen dam.[1]

The stone by John Dippie's Well

Close to where the Southern Upland Way crosses the Watch Water is John Dippie's Well. This natural spring is marked by a carved stone erected in 1869, inscribed "There is no water in the Lammermuirs sweeter than that at John Dippie’s Well."[3] The remains of an 18th-century farmstead, traditionally the home of the well's Keeper is located nearby.[3]

The reason for the sweetness of the water, according to family sources, was that John would go ahead of his shooting party to add some whisky to the water.