St John's Town of Dalry, usually referred to simply as Dalry, is a village in Kirkcudbrightshire. It is situated in the parish of Dalry, from which it takes its name.

It is located sixteen miles from Castle Douglas along the A713 road, and is at the southern terminus of the A702 road toward Edinburgh.

St John's Town of Dalry was named after the Knights of St John (the Knights Hospitaller),[1] and is found on an old pilgrimage route to Whithorn in Wigtownshire and to St Ninian's Cave at Glasserton.

The town is sited on a bend of the Water of Ken, about three miles from the northern edge of Loch Ken. 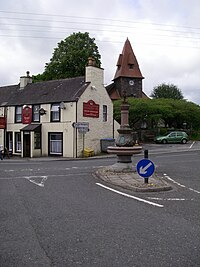 The fountain, Clachan Inn, the town hall and the A702/A713 junction in St John's Town of Dalry

St Johns Town makes a good base for exploring the surrounding region, the Southern Upland Way, and the nearby Galloway Hills, including the peaks of Corserine and Cairnsmore of Carsphairn.