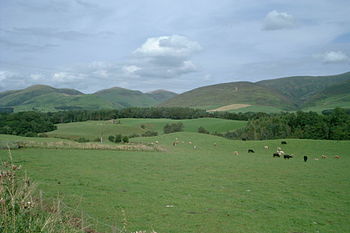 Looking east across Nithsdale to the Lowther Hills

Source of the River Clyde in the Lowther hills 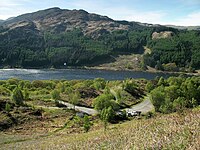 From Eschoncan at Bruce's Stone

The Devil's Beef Tub (in sunlight) and the lush green Annandale 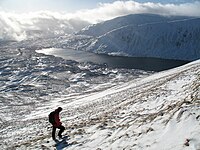 Over Loch Skene to Mid Craig

The Southern Uplands are the hills and mountains which stretch in a series of ranges of hills from Ayrshire in the west to Berwickshire and East Lothian in the east and from the Cheviots in the south to overlooking the coastlands of the River Forth. They consist of the Galloway Hills, amongst which the highest mountains are found, with surrounding hills, and the eastern ranges. All together these are essentially the northern part of one chain of hills with the Pennines. Both the Pennines and the Southern Uplands may claim ownership of the Cheviot Hills.

The broad dale of the River Tweed makes a division between the Cheviots in the south and Lammermuir to the north, the river and its basin providing low, fertile farmland in contrast to the rough hills each side. The hills nevertheless are united further west, where headwaters of the Tweed rise.

The name "Southern Uplands" is relatively recent, and though the hills are northern, they are southerly from the viewpoint of the Central Lowlands. Of the three major geographic areas which collectively are called Scotland, the Southern Uplands are also the southernmost and least populous.

The Southern Uplands lie south of the Southern Uplands Fault line that runs from Ballantrae on the Ayrshire coast northeastwards to Dunbar in East Lothian on the North Sea coast, a distance of some 136.7 mile (220.0 km). They thus extend into Ayrshire, Berwickshire, Dumfriesshire, East Lothian, Kirkcudbrightshire, Lanarkshire, Midlothian, Northumberland, Peeblesshire, Roxburghshire and Selkirkshire.

In geological terms, the Southern Uplands consist mainly of Silurian deposits laid down from 400-500 million years ago[1] and pushed up from the sea bed into an accretionary wedge by the collision of ancient continents. The majority of the rocks are weakly metamorphosed coarse greywacke.[2] An overwhelmingly rural and mainly agricultural region, the Southern Uplands are partly forested and contain many areas of open moorland. 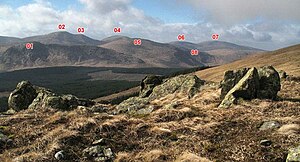 The main ranges of hills within the Southern Uplands, generally from west to east, are:

Although the summits are not as high as those to be found in the Highlands or Cumberland, parts of the Southern Uplands are remote and mountainous.

Some of the more notable peaks in the Southern Uplands are:

– The county top of its county(s)

The region is drained by numerous rivers, the most important of which are the River Clyde, flowing 106 miles to the west coast at Glasgow and the River Tweed, flowing 97 miles to the east coast at Berwick upon Tweed. The sources of the Clyde and th Tweed lie close together. Several significant rivers drain southwards into the Solway Firth and Irish Sea including (from west to east) the River Cree, River Dee, River Nith, River Annan and the River Esk.

There are numerous lochs in the Southern Uplands, particularly in the west. The largest is Loch Ken which arises from the damming of the Water of Ken. Several other lochs in Galloway are dammed such as Loch Doon, Loch Bradan and Clatteringshaws Loch though many smaller ones remain in a more natural state such as Loch Dee, Loch Enoch, Loch Grannoch and Loch Trool.

To the east of Moffat is the largest natural body of water in the Southern Uplands, St Mary's Loch on the border of Peeblesshire with Selkirkshire, together with the adjacent Loch of the Lowes and nearby Loch Skeen. There are several other reservoirs in the vicinity including Megget Reservoir, Talla Reservoir and Fruid Reservoir whilst Daer Reservoir lies among the Lowther Hills.

The area has a wide diversity of species and habitats. The uplands support black and red grouse, mountain hares, hawks and other birds of prey amongst which are such as golden eagles and hen harriers, and some unusual plant species. The western hills are home to red deer, roe deer and feral goats. Red squirrels are still found here in significant numbers. Ospreys are found at St Mary's Loch and along the River Tweed. Brown trout are common in many burns and a number of the rivers in the area have populations of sea trout, salmon and otters.[4]

Agriculture and forestry are the main forms of land use in the Southern Uplands. Sustainable power has been in production for several decades: the Galloway hydro-electric power scheme was built between 1930 and 1936. More recently a number of wind farms have been developed on upland sites. Tourism and recreation are of increasing importance: walking, fishing and grouse shooting are traditional pursuits and mountain biking has become popular in recent years.

The textile industry employed large numbers in many of the towns of the Middle Shires in the 19th and 20th centuries. Stocking frames were introduced in Hawick in 1771 and the first woollen mill in Galashiels' was built in 1800, but textile manufacture had a long history in the area: linen production had been a major industry since the Middle Ages. The textile industry declined in the late 20th century, with 7,800 people employed in 1981 and only 4,400 by 1998. However, it continues to be significant to the local economy.

Generally, sheep and arable farming are more predominant in the shires along the Tweed, while dairy farming is traditionally more important in Galloway and Dumfriesshire,[5] although recent years here have seen a move away from cattle grazing towards sheep farming.[4] Several breeds of livestock have originated in the Southern Uplands, including Galloway cattle, Ayrshire dairy cattle and Cheviot sheep.[6]

Large areas of the Southern Uplands are covered with forests, including:

The amount of forested land cover in the western Southern Uplands increased greatly between the 1940s and the 1980s, from 1% to 23%,[4] thanks to the efforts and enterprise of the Forestry Commission.

The Southern Uplands have always formed a major obstacle to travel between the more heavily populated and industrialised Central Lowlands north of them and the cities of Lancashire and the Tyne to the south. Major roads and railways follow the east coast route and various valley routes radiating northwards from the Carlisle area.

The primary roads run through the Southern Uplands run north-south through the dales, with the exception of the A75. The M74 motorway, the Carlisle-Glasgow railway and the A76 all squeeze through Annandale. The A7 heads from Carlisle to Edinburgh by way of Liddesdale. Other main routes follow the coast.

There is some good rock climbing in the Galloway Hills. The majority of the climbing is on good quality granite, often slabby and sometimes a bit broken in nature. In cold winters there is good ice climbing on the hills of Craignaw, Merrick and Cairnsmore of Fleet.[9]

The Southern Uplands and especially those areas adjacent to the English shires have a troubled and bloody history, for they are part of the Middle Shires, once the lawless Borders, between Enfgland and Scotland when these were separated kingdoms. Amongst these hills from east to west are the sites of many raids, campaigns and bloody battles, including the Battle of Ancrum Moor, the Battle of Nesbit Moor and the Battle of Philiphaugh. The Common Riding festivals of many towns hereabouts such as Jedburgh, Kelso, Hawick, Peebles, Selkirk and Langholm recall this history, re-enacting the practice of riding the boundaries of the town to enable warning to be given of raids from reivers from the south.[10] The reivers were not put down until King James VI united the two sundered thrones in 1603.

This violent history is also commemorated in many 'Border ballads', another common theme of which is the supernatural, as in the ballads of Thomas the Rhymer and Tam Lin. Many Border ballads were collected by Sir Walter Scott in his Minstrelsy of the Scottish Border. Scott also portrayed the social history, folklore and traditions of the Middle Shires in several of his prose and verse works (such as The Lay of the Last Minstrel), as did James Hogg, known as the Ettrick Shepherd.