Portpatrick is a village on the west coast of the Rhinns of Galloway in Wigtownshire. It looks out on the North Channel, across which lie the counties of Ulster. The parish is about 4½ miles in length and 4 miles in breadth, covering 9,300 acres.

Portpatrick village is on the south-westerly coast of Wigtownshire, cut into a cleft in steep cliffs. Anciently known as Portrie (Port Rhin), its quay was protected by the baron of Dunskey Castle (from dun meaning castle; key meaning quay) and his local men. When being invaded, the fishermen and their families probably scrambled up the cliffs to Dunskey for protection.

Dating back some 700 years and built adjacent to the ruins of nearby Dunskey Castle, Portpatrick's position on the Rhinns of Galloway affords visitors views of the coast of Ulster 21 miles to the west, with cliff-top walks and beaches both north and south. The Gulf Stream, flowing in from the north, gives the coastline a pleasant climate, in which subtropical plant life can flourish.

Portpatrick has a Community Council,[1]

There are bowls clubs, a golf club, many guesthouses and hotels, and rustic public houses. The village is also home to a mini putting course.

To the north of the village is the starting point of the Southern Upland Way, a long-distance walking route to Cockburnspath on the North Sea coast of Berwickshire. The Portpatrick Hotel, built in 1905 and extended in 1907, sits on the cliffs above the point where the path begins.

Portpatrick village was founded on fishing, operating from the sandy, crescent-shaped harbour that remains the focal point of the village today. Attempts were made to render it safer from the strong North Channel gales. In 1770 John Smeaton, the leading civil engineer of his day, was appointed to make further improvements. He constructed breakwaters that turned the sandy bay into an enclosed harbour. Strong westerly winds and waves eventually broke through this construction, and in 1821 John Rennie the Younger was appointed to create a new harbour defined by two new piers. Money and weather problems meant that these piers were never finished. The calm inner basin, now home to the port's lifeboat, was constructed between 1861 and 1863, too late to prevent the government switching the mail service to boats that plied between Stranraer and Larne. The harbour retains a fleet of fishing craft, a Navtex and a lifeboat station. 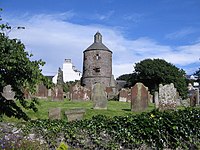 This ruined church, dating from 1629, may itself stand on the ruins of an earlier church, known as St Patrick's Chapel. The circular tower may date from the 1520s, and originally stood on its own. Its unusual shape may mean that it was either a lighthouse for the harbour, or heavily influenced by Irish architecture.

In the 18th and 19th centuries, when Portpatrick was an important ferry port for passengers, postal mail and freight between Ireland and Scotland, the village was described as the Gretna Green for Ireland. There was a daily packet boat from Donaghadee, and marriages for couples from Ireland were conducted by the Church of Scotland minister in Portpatrick, although according to Brack (1997) he often overlooked the rules about the publication of banns or the required period of residence. It's believed that happy couples could disembark, complete the ceremony, and be back on board within an hour.

The graveyard around the church contains memorials to many victims of shipwrecks in nearby waters. Joined to the original chapel was a district by the name of the Black Quarter of Inch. When the church was rebuilt in 1629, the Black Quarter was disjoined from Inch and erected as the Parish of Montgomorie. The name of the parish however was changed after only two or three years to that of Portpatrick.

Portpatrick railway station, completed in 1861, was the original terminus of the Portpatrick Railway. In its hey-day, it received twelve-coach trains on excursions from Glasgow. It ran its last service, to Stranraer, on 6 February 1950. 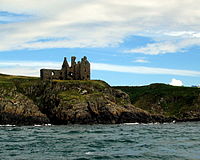 Half a mile south of the village is Dunskey Castle, reached by way of a steep trail incorporating steps and a narrow bridge. The site has seen at least two castles, though the present ruins date from the 16th century.[3]

Cairn Pat (or Cairnpot) is the ruin of a large fort or walled settlement enclosed an area of 3 acres, about 450 feet by 400 feet. The site is within two ancient walls, covered on the west by ramparts.

On the north a road passed diagonally through the defences from the northwest and from the southeast a natural hollow ran out from the fort, flanked on the west by a face of outcropping rock. The site has been much examined by archaeologists.