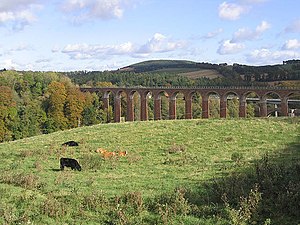 The site of Trimontium, in the Eildon Hills

The Roman Heritage Way is a long-distance path in the Middle Shires, winding through parts of Northumberland, Cumberland and Roxburghshire. Its theme is the Roman wall and frontier forts hereabouts; Hadrian's Wall and its forts, and the forts which the Romans maintained north of the wall. It is not an A – B route but has three arms, reaching east, west and north from a point near Housesteads fort on Hadrian's Wall.

The way is intended to follow in the footsteps of the Roman legions of the 1st and 2nd centuries. It is 98 miles between Segedunum at Wallsend and Trimontium at Melrose, or 101 miles from Maia Fort at Bowness-on-Solway to Trimontium. This latter, longer walk is suited to 6/7 days of walking.

The Way was developed from sections of the Hadrian's Wall Path, the Pennine Way, Dere Street, the St Cuthbert's Way, and a set of core paths around Newtown St Boswells and Melrose.

Three main options present themselves to the walker:

The latter option runs the complete length of Hadrian's Wall, with a range of Roman forts, museums and exhibitions on the way and at either end.