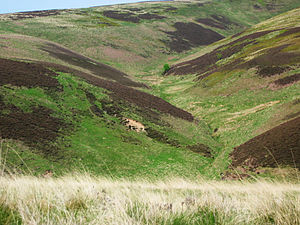 The Lammermuir is a high moorland in southern Scotland, which forms a natural boundary between Lothian and the shires on the River Tweed.

The hills span the counties of East Lothian, Selkirk and Berwick, and west to east they stretch from Gala Water in Selkirkshire to St Abb's Head in Berwickshire. The hillsides are richly grazed by sheep.

The hills are nowhere especially high, the highest points being Meikle Says Law at 1,755 feet and the Lammer Law at 1,729 feet, but steep gradients, exposure to the elements and a lack of natural passes combine to form a formidable barrier to communications between Edinburgh and the lands of the Tweed.

The hills are crossed by only one major road, the A68, which crosses the shoulder of Soutra Hill between Lauder and Pathhead, which is a main route between Northumberland and Edinburgh, though it is frequently closed by snow in winter. The main road linking Edinburgh to the south, the A1 which follows the old Great North Road, avoids the hills by following a circuitous route around the coast.

Sir Walter Scott's historical novel The Bride of Lammermoor is set in the area, as is Gaetano Donizetti's opera Lucia di Lammermoor which is itself based on Scott's novel.

Name of the moor

The name of the moor has also been written "Lammermoor", and though this is less frequent these days, the Scots "muir" being affected, it is the form familiar to readers of Sir Walter Scott's The Bride of Lammermoor.

White Castle was an Iron Age hill fort, settled by the ancestors of the Gododdin or Votadini tribe.