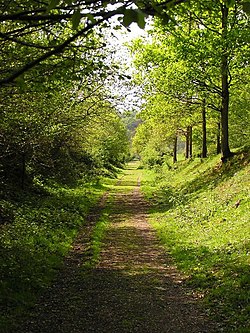 The Wye Valley Walk is a long-distance footpath following the course of the River Wye through five counties.

In 1975 the Wye Valley Walk opened with a 14-mile stretch between St Arvans and Monmouth.[1] Further stretches were added, leading to it becoming a 34-mile footpath by 1981.[1] During the 1980s, gaps between Ross-on-Wye, Hay-on-Wye and Rhayader were integrated into the pathway, forming a 112-mile walk reaching from near the river's mouth at Chepstow in Monmouthshire, to Rhayader in Radnorshire.[1]

In September 2002, the route was finally extended to start or finish in the Hafren Forest, having passed within viewing distance of the source of the River Wye on Plynlimon near Aberystwyth, a total of 136 miles.[1] 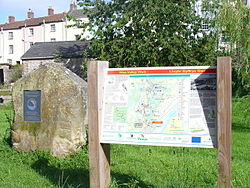 The southern end of the path, near Chepstow Castle 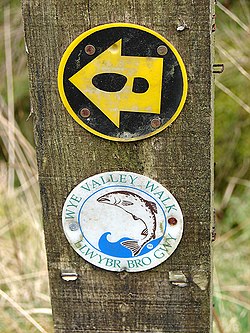 Waymark signs on the path 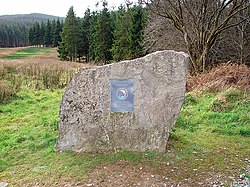 The northern end of the path

The Wye Valley Walk is marked out by circular yellow waymark arrows, finger posts, and signs showing the path's logo, a leaping salmon. Most of the route follows public Rights of Way. Some parts are permissive paths where owners have agreed for them to be used. Parts of Plynlimon are open countryside in which there is a right to roam established by the Countryside and Rights of Way Act 2000.[2]

The route of the Wye Valley Walk can be broken into 17 stages,[3] though the entire walk is often walked in 7 day-length sections from Chepstow to Plynlimon, or vice versa.[4]

The following stations can be used to connect with the Wye Valley Walk: