Kerne Bridge is a bridge, and a hamlet in the very south of Herefordshire, close to the borders of Gloucestershire immediately downstream to the south and of Monmouthshire to the south-west.

The bridge is about three and a half miles south of the market town of Ross-on-Wye and allows the B4229 road to cross River Wye from Goodrich to Walford where it joins the B4324 Ross-on-Wye to Coleford road. The bridge is Grade II listed, of national importance and special interest.

The hamlet, which is within the parish of Walford, was originally known as 'the Quern', but later became named after the bridge which was built in 1828.

In 1873, the Ross and Monmouth Railway line from Ross-on-Wye to Monmouth Troy was built. It crossed the River Wye at Kerne Bridge on a single-track skew bridge constructed of plate girders. The single-track bridge was built by Edward Finch of Chepstow and was 436 feet long. Kerne Bridge railway station was the first initially station after leaving Ross-on-Wye, though Walford Halt at Walford was built later between them.

The station closed in 1959 when passenger service on the line was withdrawn. Goods services continued to run until 1964, when the bridge was demolished, leaving the masonry abutments. [1] Nearby is a picnic place and canoe launch site based at the site of the bridge.

The station building, after many years as an outdoor activity centre, is now a private house. On the other side of the river is Flanesford Priory, which is now holiday accommodation. 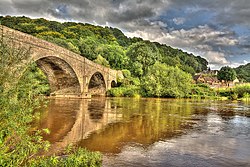 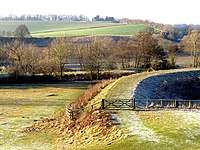 Goodrich Castle beyond the river