Symonds Yat is a village in the very south of Herefordshire, on the north bank of the River Wye, which here forms the border with Gloucestershire, and occasionally trespassing over the river, and all within a few miles of the bounds of Monmouthshire. It is a popular tourist destination.

The name of the village is said to come from Robert Symonds, a 17th-century sheriff of Herefordshire and "yat" as an old word for a gate or pass.[1]

Archaeologists have uncovered bones from Hyenas, Sabre-Toothed Cats and a Mammoth in and around the caves of the valley and human inhabitation can be traced back to 12,000 years ago with findings of their tools and clothes.

In Iron Age times the forts on the Great Doward and the Yat Rock provided secure, defensible settlements for the local residents. During Roman times these forts became focal points in the region and the importance of the iron here and in the Forest of Dean made this a valuable prize for the conquerors.

Offa's Dyke was built in the 8th century directly above the Yat to separate the lands of the English from those of the Welsh.

The first recorded use of the word 'Yat' in connection with the area was made in 1265. 'Yat' is an old English word for Gate or Gorge. It is popularly believed that the addition of Symonds was made in the 17th century in reference to Robert Symonds of Sugwas and Evesfield who was indeed a member of the family who owned the lands from Wormelow near Hereford to the border regions in which the Yat stands. He was High Sheriff of Herefordshire in 1685. The area is also shown as Symons Yate on maps in 1665, Symons Yat in 1717 and Symmonds Gate in 1830.

The Old Court Hotel in Symonds Yat (West), which was built in the 16th century,[2] was the ancestral home of the Gwillim family and was home to John Graves Simcoe, who was governor and one of the founding fathers of Upper Canada.[3]

The Yat Gorge was mined for iron ore and remains of a smelting works are located down stream of the Symonds Yat Rapids.[4] The ironworks at New Weir date from the 1590s and were operated by the White family until 1753, when George White leased the site to John Partridge, an ironmonger from Ross-on-Wye. Partridge combined the ironworks at New Weir with his forge at Lydbrook which smelted pig iron from his furnace at Bishopswood.[5] The works closed when the lease ran out in 1798 and the adjacent weir and lock buildings were demolished and the lock filled in 1814.[5]

The Ferry at Symond's Yat has always played a huge part in the life here. In 1800 there were 25 hand ferries between Ross and Chepstow just like that outside Ye Old Ferrie Inn & Saracen's Head today. Tradition has it that they were introduced in Roman times to link the forts of the Doward and the Yat and have served Military, Civilian, Tourist and Horse traffic over the years.

Symonds Yat originally encaptured all the lands south of Huntsham curve on both sides of Symonds Yat Rock and would have included the area around Coldwell Rocks. The curve of the Wye itself is within Herefordshire on both banks. 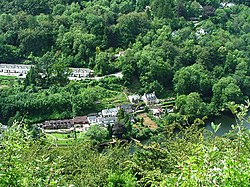 The Wye at Symonds Yat West

In April 2009 Herefordshire Archaeology excavated New Weir Iron Works at Symonds Yat (West) to establish how the iron works functioned between the start of smelting in and the decline of the works in the 1800s. It was found that the works included a 'slitting mill', for making wire nails and a rolling mill powered by water wheels.[6] 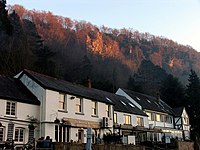 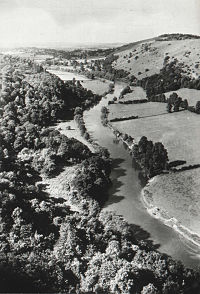 Wye Valley the view from above at Symonds Yat

Symonds Yat (East) is on the eastern side of the river, very close to the Gloucestershire border, within the tight loop of the River Wye. It has three hotels, WyeDean Canoe & Activity Centre and the Saracens Head Inn (with accommodation). A steep footpath leads from the village up to Symonds Yat Rock. Another footpath and a cycleway, constructed on a former railway line, runs on the eastern bank to Monmouth.

Hand-pulled ferry over the Wye

A suspension bridge was built over the river by the Forestry Commission using local oak timbers in 1957. Linking Symonds Yat (East) to the Biblins camp site, the bridge was fully refurbished in 1997 and rotten timbers and the two support towers were replaced. Although it is designed to take up to 30 people, it has a badly weathered sign requesting that no more than 6 cross at a time.[8] 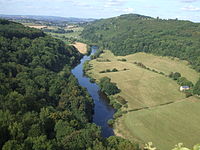 Symonds Yat Rock overlooks a spectacular gorge through which the River Wye snakes. This rock is the perfect viewpoint from which to watch raptors. A pair of peregrine falcons that nest annually within sight of the rock can be watched through telescopes set up by the RSPB. Buzzards, goshawks and hobbies are also regularly seen and it is sometimes possible to see migrant buirds of prey such as ospreys and honey buzzards.

Seven Sisters Rocks are seven limestone pillars on the Herefordshire side of the River Wye.

The River Wye at Symonds Yat has cut a deep gorge in the Carboniferous Limestone exposing numerous impressive cliff faces. There is extensive and popular rock climbing in this area with long single pitches at all grades.[9]

At nearby 'King Arthur's cave' on the Great Doward, there have been important archaeological discoveries including the remains of a hyena family and Sabre-toothed tiger bones.

Tourist activities include canoeing and kayaking down the rapids, boat trips, a maze, an oriental garden, and a number of country pubs and guest houses, including the Old Court, The Saracens Head Inn, Ye Old Ferrie Inn and the Wyenot.

The wild beauty of Symonds Yat has featured on screen many times, amongst which:

The Saracens Head Inn in the hamlet of Symonds Yat (East) Was featured In "Escape To The Country" on BBC1 in 2014.

Symonds Yat Rapids are a grade 2 man-made feature at Symonds Yat used by canoeists and kayakers for whitewater training and playboating.[10]

Symonds Yat station was located on the Ross and Monmouth Railway that ran from Ross-on-Wye to Monmouth Troy between 1873 and 1959 through the scenic Wye Valley.