From Wikishire
(Redirected from Wye Valley)
Jump to: navigation, search 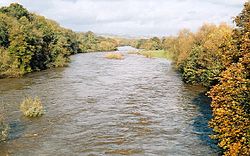 The Wye at Hay-on-Wye 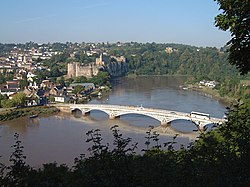 The Wye at Chepstow

The River Wye (Welsh: Afon Gwy) is the fifth-longest river in the United Kingdom and for most of its length marks several county boundaries. The Wye is important for nature conservation and recreation.

The Wye rises is in the mountains at Plynlimon, high in the Cambrian Mountain. In its upper reaches the Wye is a mountain river and cuts a green dale for many miles between high peaks, marking the long border between Brecknockshire and Radnorshire, passing through or past several towns and villages such as Rhayader and Builth Wells.

The Wye comes down from the hills at Hay-on-Wye, still marking the edge of Radnorshire but now its boundary with Herefordshire until Rhydspence, when it enters the body of Herefordshire. Running eastward between the coombs and farms, the Wye is a broad river when it passes through Hereford beneath the gaze of its ancient cathedral, then in a series of broad meanders it flows south to Ross-on-Wye, and some miles below it begins to mark the boundary of Herefordshire and Gloucestershire. In the great loop at Symonds Yat it tumbles over some famous rapids, and heads for Monmouth, where it swallows the River Monnow heads south to mark the boundary of Gloucestershire with Monmouthshire, passing Tintern, finally disgorging into the Severn estuary just below Chepstow. The river's total length is 134 miles.

Although a long river and broad in its lower reaches, the Wye has not been harnessed to industry but remains a country river, the only sizable town only its banks being the City of Hereford, itself a modest place. The Wye is a "Site of Special Scientific Interest" and one of the most important rivers in the United Kingdom for nature conservation. Much of the lower valley is an "Area of Outstanding Natural Beauty".

The Wye is largely unpolluted and used to be considered one of the best rivers for salmon fishing in the United Kingdom, outside Scotland. However, in recent years the runs of salmon in the Wye have declined dramatically and according to the Environment Agency rod catch returns for 2009, greater salmon catches were made in several other rivers; the Dee, Tyne, Ribble, Wear, Lune and Eden. In 1967 the Wye rod catch was 7,864; as recently as 1988 it was 6,401 but by 2002 it was only 357, a low from which it is recovering only very slowly despite the extensive habitat improvement work carried out by the Wye and Usk Foundation that was set up to restore the spring salmon runs.

The Wye was particularly famous for its large "spring" salmon that had spent three or more years at sea before returning to spawn. They used to enter the river between January and June and sometimes reached weights of over 50lbs, the largest recorded being 59lbs 8oz landed after a long fight by Miss Doreen Davey from the Cowpond Pool at Ballingham on 13 March 1923. The last recorded 50lb rod-caught salmon from the Wye was taken in 1963 by Donald Parrish and weighed 51lbs 8oz. These large spring salmon have almost disappeared over the past two or three decades.

The Wye relatively slow-flowing water have made is a popular river with canoeists, and ideal for beginners. The Symonds Yat Rapids present a more challenging spot for the adventurous. There is a public right of navigation downstream from Hay.

Walkers can enjoy the Wye Valley Walk which follows the route of the River Wye from Coed Hafren to Chepstow along a series of well-maintained way-marked paths.

A viewpoint near The Biblins on the Wye is known as 'Three Counties View', the meeting place of the counties of Hereford, Gloucester and Monmouth, and for the 16 miles of the river below that point to the sea at Chepstow, the river forms the border between Gloucestershire and Monmouthshire.

The Environment Agency is the navigation authority for the river. The normal tidal limit of the river is Bigsweir and navigation below this point is under the control of the Gloucester Harbour Trustees as Competent Harbour Authority. 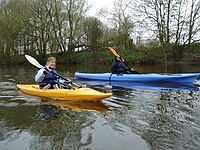 Kayaks on the Wye near Hay

The River Wye provides for canoeing and kayaking as it has sections suitable for all ranges of skills and free access all the way downstream from Glasbury through Hay-on-Wye to Hereford and the Severn Estuary.[1] Leisurely canoe touring has been developed on the Wye, and the river presents to the unhurried waterborne visitor a quite road through beautiful green countryside.

There are a wide range of canoe hire and supervised trips, as well as campsites at key points on the river. Symonds Yat has a particularly popular series of rapids that was bought by the British Canoe Union in 2003 to preserve the rapids for recreational use.[2] 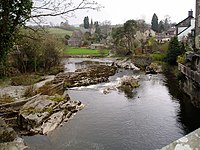 The Wye at Rhaeadr

The Romans built a bridge of wood and stone just upstream of present-day Chepstow. The River Wye was and still is navigable up to Monmouth at least since the early 14th century.

Navigation on the Wye was improved from there to a short distance below Hereford by Sir William Sandys in the early 1660s with locks to enable vessels to pass weirs. According to Herefordshire Council Archaeology, these were flash locks.[3] The work proved to be insufficiently substantial and in 1696 a further Act of Parliament authorised the County of Hereford to buy up and demolish the mills on the Wye and Lugg. All locks and weirs were removed, except that at New Weir Forge below Goodrich, which survived until about 1815. The work was paid for by a tax on the county. Weirs were removed all along the Wye in Herefordshire, making the river passable to the western boundary, and beyond it at least to Hay on Wye.

A horse towing path was added in 1808, but only up to Hereford; previously, as on the River Severn, barges were man-hauled. Money was spent several times improving the River Lugg from Leominster to its confluence with the Wye at Mordiford, but its navigation is likely to have been difficult. The Wye remained commercially navigable until the 1850s, when commercial traffic moved to railways. It is still used by pleasure craft.