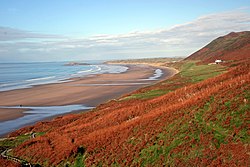 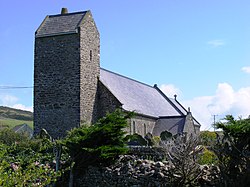 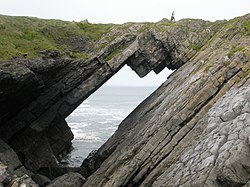 The Devil's Bridge at Worm's Head 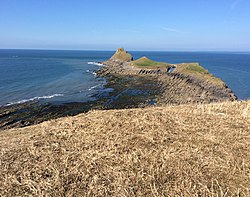 Rhossili is a small village and parish on the south-western tip of the Gower Peninsula in Glamorgan.[1] It is within an area designated as the first Area of Outstanding Natural Beauty in the United Kingdom.

Rhossili probably gets its name in part from the Welsh word for moorland, rhos. The second element in the name may be a reference to a Saint Sulien or St Sili, but details are not clear. Certainly the present Norman church is dedicated to St Mary the Virgin. Inside there is a memorial to Edgar Evans who was the first to perish on the Terra Nova Expedition on the return from the South Pole.

There was a local tradition that there had been an earlier, pre-mediæval village complete with church closer to the sea which had been abandoned after "besanding" in the 14th century. A storm and subsequent excavation of newly exposed remains in the Warren (an area of sand dunes to the north of the present village) in 1980 helped to confirm the truth of this.

Despite its relatively remote position, Rhossili is a popular tourist destination: the views from the headland and the Down are panoramic; several pleasant walks begin, end, or pass through the village; Iron Age remains are found on Rhossili Down; and the four-mile -long beach attracts surfers, particularly at the Llangennith (northern) end.

The prominent wreck of the Helvetia, which ran aground in Rhossili Bay in November 1887, bears witness to the challenging sea conditions.

Rhossili Bay curves along an arc running northwards from the village. The sandy beach is three miles long and is backed with sand dunes. Locals refer to the beach as Llangennith Sands. Behind the beach just north of the village is Rhossili Down with the highest point on the Gower Peninsula, the Beacon at 633 feet, and a number of prehistoric remains. It is between Rhossili Down and the beach proper that the Warren is found.

At the southern end of the Bay is the small tidal island called Worm's Head which forms the westernmost point of Glamorgan. At the north is Burry Holms. These islands are accessible at low tide only. Also at low tide, it is possible to see the remains of several shipwrecks, wood from the wreck of the Helvetia being the most prominent when looking north from Rhossili. Worms Head consists of two islands, Inner and Outer Head. Outer Head reaches 184 feet in height, Inner head 154 feet.

Rhossili Bay featured in the Opening Ceremony of the London 2012 Olympic Games, a youth choir began a cappella performances of "Bread of Heaven" live on the beach with was broadcast at the Olympic Stadium.[2] The bay has been used as the setting of New Earth in the sci-fi show Doctor Who and the bay including the Old Rectory was used in Torchwood: Miracle Day. In 2014, it was voted the UK's number one beach, third best in Europe, and 9th best in the world, by TripAdvisor users.[3][4]

Fall Bay is one of the most remote and hardest to reach beaches on the Gower. The beach is never crowded due to its remoteness. There is no beach visible at high tide. The beach is very popular with surfers. At very low tide, it is possible to walk over from the beach to Mewslade Bay. The beach is reachable via a path which passes Rhossili village hall. It continues over fields and many stiles and has a steep final descent. The cliff path leads east to Mewslade Bay or westwards towards the Worm's Head and Rhossili Bay.

The National Trust owns and protects much land on the Gower Peninsula. The Trust operates a visitor centre near the Warren, the Down, Worm's Head, Rhossili beach and coastal cliffs. Scenes from Torchwood: Miracle Day were filmed at the National Trust's Old Rectory cottage in Rhossili Bay.[8][9][10]

Rhossili Bay is not normally appropriate for overnight stays by visiting boats as the bay is West facing, relatively shallow and renowned as a surfing beach. It may however offer good shelter for boats in Easterly and Southerly winds - for all other wind directions it should be regarded as a no-go area. It is probably one of the few beaches that offers good shelter from Easterly winds in the Bristol Channel.

At the appropriate time of the year, the areas of both Worm's Head and Burry Holms are renowned for the good Sea Bass fishing. Worm's Head can be seen to attract many small leisure fishing vessels during the summer months. Fishing from the shore is extremely popular along both the north and south sides of the Loughor estuary to the west of Burry Holms.

On 19 June 2011, almost four hundred people attempted to break the world record for the largest number of people skinny dipping at one time in the sea at Rhossili.[11]