The village was founded to serve the slate quarry here. The quarry was formerly linked by narrow-gauge railway to the Ffestiniog railway at Blaenau Ffestiniog, a few miles to the west in Merionethshire. Before the Ffestiniog Railway, slates were brought from Blaenau Ffestiniog over the hill, down the Machno and out to Trefriw on the River Conwy for shipping.

The slopes around the village provide streams which are the source of the River Machno, which flows past the larger village of Penmachno before joining the River Conwy at the Fairy Falls south of Betws-y-coed.

Standing near the top of the valley is The Latymer School's outdoor centre, Ysgol Latymer, which every year accommodates six year 7 trips and six year 9 as well a various geography and PE trips organised by the school. The Latymer School have bought this centre in the mountains so that its pupils can get to know each other better and to find out their individual skills. 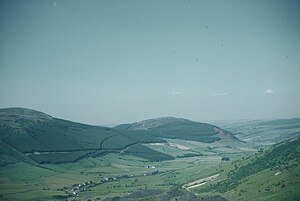 Cwm Penmachno from the south, 1969