Edinburgh Airport ((IATA: EDI, ICAO: EGPH)) is an airport located in Ingliston, immediately west of the urbans area of the City of Edinburgh, in Midlothian: the border of West Lothian runs along the northern edge of the field. Edinburgh was the busiest airport in Scotland in 2016, handling over 12.3 million passengers in that year, an increase of 11.1% compared with 2015, and the sixth-busiest airport in the United Kingdom by total passengers in 2016.

The airport is to be found 5 nautical miles flying distance west of the city centre, just off the M8 and M9 motorways. It is owned and operated by Global Infrastructure Partners, who are also the majority shareholder and lead the management of Gatwick Airport.[1]

The airport has one runway and one passenger terminal, and employs about 2,500 people.

Turnhouse Aerodrome was the most northerly British air defence base in the First World War used by the Royal Flying Corps. The small base opened in 1916[2] and it was used to house the 603 (City of Edinburgh) Squadron from 1925, which consisted of Airco DH.9|DH 9As, Westland Wapitis, Hawker Harts, and Hawker Hind light bombers. All the aircraft used a grass air strip.

In 1918 the Royal Air Force was formed and the airfield was named RAF Turnhouse and ownership transferred to the Air Ministry.

When the Second World War broke out, RAF Fighter Command took control over the airfield and a runway of 3,900 feet was paved to handle the Supermarine Spitfire. During the Battle of Britain, RAF No.s 3, 65, and 141 Squadrons were present at the airbase.

When the war ended the airfield remained under military control, but by the late 1940s the first commercial services were launched. In 1947, British European Airways started a service between Edinburgh and London using Vickers Vikings followed by the Viscount and Vanguard series.

In 1952 the runway was extended to 6000 ft to handle the De Havilland Vampire FB5s operated by the resident 603 Squadron; and an aircraft carrier Catcher Net (never used) was installed to protect traffic on the adjacent A9 road. In 1956 a new passenger terminal was built to provide an improved commercial service; five years later it was extended. After the disbandment of 603 Squadron in March 1957, the Ministry of Defence transferred ownership to the Ministry of Aviation in 1960 to offer improved commercial service to the airport. Flying was temporarily diverted to East Fortune, which had its runway extended to accommodate the airliners of the period. 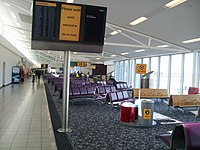 The nationalised British Airports Authority took over ownership of the airport on 1 April 1971 at a time when the original terminal building was running at about eight times its design capacity. Immediate improvements to the terminal were cosmetic, such as extra seating and TV monitors for flight information, and it took two years for plans to be proposed for a completely new terminal and runway redesign. A public consultation on planning started in November 1971 and ended in February 1972. Initial stages of the redevelopment began in June 1973; they included a diversion of the River Almond. Work on the new terminal building, designed by Sir Robert Matthew, started in March 1975, and the building was officially opened by Her Majesty the Queen on 27 May 1977,[3] opening to the public two days later.

Although the original main runway 13/31 (which is now 12/30) served the airport well, its alignment (NW-SE) had the disadvantage of suffering from severe crosswinds, and the other two minor runways were very short and could not be readily extended, so movements were transferred to a new runway (07/25, which has since become 06/24) in an addition completely outside the original airfield boundary. This runway, completed in 1977, is 8,386 feet in length, and was able to take all modern airliners including Concorde. A new terminal was built alongside the runway to cater for the additional traffic. The old terminal and hangars were converted into a cargo centre.

International service from Edinburgh began in 1962 with a direct service to Dublin, but for many years international flights were charter and private only. This started to change during the late 1970s, with direct services to continental Europe (Amsterdam, 1975). By the mid-1980s direct routes included Paris, Düsseldorf, Brussels, Frankfurt and Copenhagen, but until the Open Skies Act in 1990, all transatlantic flights had to land first at Prestwick, with very few exceptions. By the time the British Airports Authority had been privatised as BAA plc in 1987, Edinburgh Airport handled over 1.8 million passengers each year; compared to the 681,000 passengers handled in 1971 when BAA first took control of the airport.[4]

RAF Turnhouse was operational near the passenger terminal of the airport for all of the post war period, but was finally closed in 1997.[5]

Since the original terminal upgrade in 1977, there have been major reconstructions, including extensions of the two passenger terminal aprons and a major expansion of car parking facilities, including a multi-storey car park in 2004. In 2005, a new air traffic control tower 187 feet tall was completed at a cost of £10 million. An extension to the terminal called the South East Pier opened in September 2006. This extension initially added six gates on a new pier to the south-east of the original building. A further four gates were added to the South East Pier at the end of 2008.

On 19 October 2011, BAA Limited announced its intention to sell the airport, following a decision by the Competition Commission requiring BAA to sell either Glasgow Airport or Edinburgh Airport.[6] BAA announced on 23 April 2012 that it had sold Edinburgh Airport to Global Infrastructure Partners for a price of £807.2 million.[7]

In 2013, a further extension to the passenger terminal was announced, taking the terminal building up to the Edinburgh Airport tram stop. The opening of the Edinburgh Trams in May 2014 created the first rail connection to Edinburgh Airport. Whilst the number of passengers has increased, the number of flights actually decreased in 2014 due to planes operating at higher capacity.[8] Passenger traffic at Edinburgh Airport reached a record level in 2015 with over 11.1 million passengers[9] and over 109,000 aircraft movements. The terminal building has been expanded with an investment of £40 million. A new £25 million expansion project involving the construction of a new building, housing a security hall and retail areas. On 23 February 2016, Ryanair announced a growth of 20% in passenger numbers, bringing the airline's annual passenger capacity at Edinburgh Airport to 2.5 million. This was coupled with the news of six new services to Ryanair's winter schedule from Edinburgh, in addition to more services on its popular European destinations. As part of the expansion works, Runway 12/30 was officially withdrawn from use on 29th March 2018. 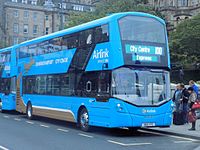 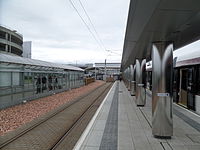 Several buss services and coach services serve the airtport with connections to Edinburgh and the West Lothian towns of Bathgate, Broxburn, Fauldhouse, Livingston and Whitburn. Others run from Fife and from Glasgow city centre.

There are connections between Edinburgh Airport and several park and ride facilities, at Inverkeithing railway station and Dunfermline.

The airport lies close to the A8 road, and can be easily reached by the M8 motorway and the M9 motorway. The airport is also within easy access from the M90 motorway by way of the Queensferry Crossing.

A more expensive Edinburgh Airport Rail Link project to provide a direct heavy rail link was cancelled in 2007 due to increasing costs.[11]

The airport is served by Edinburgh Trams, a light rail link. The system runs from the airport and travels across the western suburbs of Edinburgh, terminating in the city centre. [12][13]