Airdrie is a town in Lanarkshire, out of the Clyde valley that fills much of the shire, in the north of Lanarkshire on a plateau roughly 400 feet above sea level. It forms part of a conurbation with its neighbour Coatbridge. The town is about 12 miles east of Glasgow city centre. Clustered around the own are Airdriehill, Chapelhall, Calderbank, Caldercruix, Glenmavis, Greengairs, Longriggend, Plains, Stand, Upperton and Wattston, which function as satellite villages.

The town stands in the north of the county, where it was open to the influence of three languages; Strathclyde Welsh, English and Gaelic. The name may have many possible origins, for example the Old Welsh Ar drig (at the dwelling") or Ar dre ("by the town") or the Gaelic Àrd Ruigh "level height" or "high pasture" (Ard Reidh), or the Gaelic Àrd Àirighe meaning a sheiling.

The name has also been connected with the ancient battle of Arderyth or Arfderydd, a legendary fight of the sixth century recorded in the Welsh Annals and the Triads, but this is unproven. 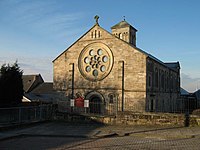 The battle of Arderyth may have been fought here in 573 though alas there is no evidence beyond a similarity of name. Cistercian monks established an abbey at Melrose in 1136 under the patronage of King Malcolm IV and five years later a daughter house was founded at Newbattle; in 1160 King Malcolm granted to the monks of Newbattle lands in the Southern Uplands which became known as the "Munklands" (in the Register of the Great Seal, 1323). Malcolm's charter constitutes the oldest documentary record of place-names in the Monklands. The area of land granted by the Charter is clearly defined by direct reference to geographical and topographical features thus: Dunpeldre by its right boundaries, namely with Metheraugh and Mayeuth and Clarnephin as far as Dunduffes in the east. The name Dunpeldre is found in the modern name Drumpellier; Metheraugh is now Medrox; Mayeuth is now Myvot; Clarnephin refers to the North Calder Water in the east of the parish (from old Brittonic name claur n afon meaning plain of the river); and, finally, Dunduffes has become directly translated into the modern Black Hill which, as the Charter states, lies at the eastern extremity of the parish. The one thing this Charter does not make any reference to is anything resembling Airdrie yet this is where Airdrie is located. 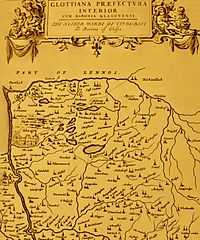 Airdrie owes its existence to its location on the 'Hogs Back' - a ridge of land running from east to west. One very important aspect of the town’s history were the Cistercian monks of Newbattle Abbey, hence a name for the wider area; Monklands. The monks of Newbattle had numerous establishments throughout the area including a farm grange at Drumpellier, Coatbridge, a court house at Kipps, a chapel in the area of Chapelhall and a number of mills. The Monks were also expert in the construction of roads. In the 12th century they established the original Glasgow to Edinburgh road by way of Airdrie and Bathgate, to link up with their lands in Newbattle in East Lothian.

Definitive evidence of the existence of Airdrie as such appear only in 1503.

It is only around 1650 that evidence of the number of inhabitants was known, at around 500 for the Airdrie area.

A large contingent of Airdrieonians fought at the Battle of Bothwell Brig during the Covenanter Rebellion of 1679 and their banner can still be viewed at the local library.

In 1695 Robert Hamilton of Airdrie obtained a private Act of Parliament allowing him to hold four fairs yearly and a weekly market in the town of Airdry. This helped develop Airdrie from a farming village into a thriving market town.

Industrial weaving transformed the town. The Airdrie Weavers Society was founded in 1781 and flax was being grown in sixteen farms in and around the burgh. In the last decade of the eighteenth century, coal mining was in progress and around thirty colliers were employed. Weaving continued to flourish making up a substantial part of the population of over 2,500 around the turn of the 19th century. Given its large number of weavers, its geographic location, and a large number of unemployed soldiers following the end of the Napoleonic Wars, Airdrie became a major centre of support for the Radical War of 1820.

In 1821 Airdrie became an "independent burgh" and elected a town council, and appointed an assessor, procurator fiscal, master of police and town crier. In 1824 it was decided to build the Town House, designed by Alexander Baird. It is a local landmark now known as the 'town clock'. In 1832 the Town House was used as a hospital due to the cholera outbreak of this year.

By 1850, the population had grown to 12,418, due to an influx of residents from the Highlands and Ireland, in particular followed the potato famine of the mid-1840s which wiped out potato harvest in the whole of the British Isles, on which crop the Highlanders and Irishmen were dependent. The new population also reflected the change from cottage industry to heavy industry in the area. Most of the Irish immigrant population were involved with mining and labouring.

Iron foundries were built, railway links were soon established (circa 1830) and by 1862, the Airdrie and Bathgate Junction Railway provided a direct link to Edinburgh while Airdrie South Station provided the starting point for trains to Glasgow.

Around the mid-1800s, several local newspapers began appearing and notably the Airdrie & Coatbridge Advertiser, which is still the most popular local paper today. Sport thrived, with new cricket and football teams. Horse race meetings were also held in the town (1851–1870) but this land became the golf course for the newly formed Airdrie Golf Club in 1877.

Airdrie Public Observatory, one of only four public observatories in the United Kingdom, was founded in 1896, and is still operated in the present building by the Airdrie Astronomical Association, a registered charity.

By the turn of the century variety shows were becoming popular in the area and by 1911 the Pavilion in Graham Street was built which after initially being used as a music hall started showing cinematographic pictures. Unfortunately it was destroyed by fire in 1917 but was rebuilt in 1919 and finally closed in 1970. The New Cinema was opened in 1920 in Broomknoll Street but too has since closed. The town had no suitable venue for larger functions so in 1912 the Sir John Wilson Town Hall was opened (following a generous offer from Sir John Wilson covering the total cost of £13,500). This still stands and is used for major events in the town.

After the Great War

Airdrie lost many young men to the First World War, then the Great Depression closed many of the town's manufacturies: it was reported that 50% of the registered population were unemployed. Church groups tried to provide some comfort for the poor folk in the area and set up educational and work experience projects to help and by 1936 the Airdrie Churches Council had attracted national interest through their work culminating in a building in Graham Street being provided for them (the Mutual Service Club). This is now Airdrie Community Centre.

Industry returned after the Second World War: Boots, Banner Textiles Ltd and later Pye opened here. Industrial estates were built. The Airdrie Arts Centre opened in 1967 in the former Airdrie Library building and remained a popular venue for concerts and plays till it was closed in 2012.

Airdrie's traditional economic activities of weaving, coal mining, and heavy industry have ceased to exist. Given its location near to Glasgow and other commercial or industrial areas, Airdrie is something of a commuter town, but significant economic activity continues.

Airdrie railway station is on the electrified North Clyde Line. This railway provides a frequent train service to Glasgow via Coatbridge Sunnyside and Easterhouse. In 2010, the Airdrie-Bathgate Rail Link opened providing Airdrie with a direct commuter train service to Bathgate, Livingston North and Edinburgh Waverley. Drumgelloch railway station serves the eastern end of the town.

Airdrie has road links to Glasgow, Edinburgh, Motherwell, and Cumbernauld and is situated close to the M8 motorway.

Airdrie is connected to the UK National Cycle Network by National Cycle Route 75. This route provides a path between Glasgow and Edinburgh. According to the Sustrans website, this path has yet to fully reopen [1]. Other than the Sustrans path, there are no cycle lanes in Airdrie.