Prestwick Airport or Glasgow Prestwick Airport in Ayrshire is Glasgow's second airport, it also serves the Greater Glasgow urban area, situated 1 nautical mile northeast of the town of Prestwick and 32 miles from the city centre of Glasgow.

In physical terms, Prestwick is one of the largest commercial airfield in Britain, although in passenger traffic terms it sits in fourth place in the north, after Edinburgh Airport, Glasgow International, and Aberdeen Airport. Passenger traffic peaked in 2007 following ten years of rapid growth, driven in part by the boom in no-frills airlines, especially from Ryanair who uses the airport as a hub. Since 2007 there has been a significant reduction in passenger traffic with just under 1.1 million passengers passing through the airport in 2012, down from a peak of more than 2.4 million in 2007.

On 8 March 2012 airport owner Infratil announced that they had placed the airfield up for sale. The Chief Executive Marco Bogoievski said that the selling of the airport was a "no regret" decision.[1]

As of April 2013, over a year after the owners put it up for sale, the airport remains unsold. 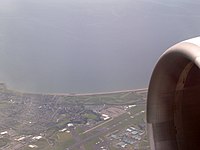 Prestwick Airport from the air

The airport began life around 1934 — primarily as a training airfield — with a hangar, offices and control tower being in place by the end of 1935. The airport's original owner was David Fowler McIntyre, who was also the owner of Scottish Aviation with backing from the then Duke of Hamilton. MacIntyre and Hamilton had previously been the first aviators to fly over Mount Everest in 1933. With the onset of Second World War, the airport developed rapidly in order to handle the large volume of American aircraft ferry traffic.

In 1938 passenger facilities were added which were used until the implementation of a massive investment programme to make Prestwick compatible with the new jet transports. The October 1946 USAAF diagram shows 6,600-foot runway 14/32 with 4,500-foot runway 8/26 crossing just west of its midpoint. In 1958 runway 13/31 was 7,000 feet long; in May 1960 the extension to 9,800 feet opened. A parallel taxiway, link road and an all-new terminal building were opened by the Queen Mother in 1964. The extension of Runway 13/31 caused considerable disruption to road users as the main road from Monkton into Prestwick was now crossing the tarmac of the existing runway. This was strictly controlled by a "level crossing" system until the new perimeter road was completed.[2]

The United States Air Force (USAF) operated a base in 1952 on the site of the original airport using former Royal Air Force (RAF) facilities (the USAF Military Air Transport Service (MATS) 1631st Air Base Squadron), and in 1953 on the Monkton side of the airport, both used by the USAF MATS. The USAF base closed in 1966.

There had been proposed plans drawn up pre-war for the post war years which would have been classed as extremely ambitious, especially in the austere post-war years. Among the various proposals was a main runway 4 miles long, an integral freight yard and railway station, and a semi enclosed mooring for flying boats and other amphibious aircraft. However, the runway was never lengthened to that degree, and the decline in seaplane and flying boat operations also meant that the latter proposal was never enacted. It is telling however, that many years since those proposals were made, Glasgow Prestwick Airport does have its own railway station, something that neither Glasgow nor Edinburgh International Airports currently have.

Today part of the Prestwick site is occupied by the Royal Navy Fleet Air Arm with RNAS Prestwick, (officially known by the Royal Navy as HMS Gannet), where a detachment of 3 Sea Kings provide a search and rescue role, covering one of the largest SAR areas of the United Kingdom including Ben Nevis, the Lakes, Northern Ireland and 200 nautical miles past the Irish coast. Additionally, Gannet SAR provides a medical evacuation service to the Hebridean island communities. Personnel at the base numbers 15 officers, 11 ratings, 28 civil servants and 50 civilian staff. The crews regularly feature as part of the popular Channel 5 documentary series Highland Emergency.

In 2009 the unit broke a new record as they were tasked to 447 call outs. This figure equates to 20% of the United Kingdom’s total military SAR call outs for 2009 making them, for the second year in succession, the busiest Search & Rescue base in the UK.[3]

Scottish Aviation built a factory using the original terminal building and hangars at Prestwick, which from 1974 produced such aircraft as the Prestwick Pioneers, and later the Handley Page Jetstream and the Bulldog. One part of the factory, the large white art-deco building which remains to this day, had in fact been the Palace of Engineering that had been built as part of the Empire Exhibition at Bellahouston Park in Glasgow in 1938. When Scottish Aviation merged with British Aerospace as a result of the Aircraft and Shipbuilding Industries Act, BAe maintained aircraft production at the site until 1998, primarily updates of the Jetstream line. A total of 1,243 complete aircraft were built at Prestwick by this time.

Today BAE Systems retains a small facility at Prestwick for its BAE Systems Regional Aircraft division, with the adjoining main manufacturing site, producing components for Airbus and Boeing aircraft, having been sold to Spirit AeroSystems in January 2006.

In the beginning Prestwick was the only Scottish airport allowed to operate a transatlantic link, largely due to the benign weather conditions on the Ayrshire coast. Indeed, with a much lower incidence of fog than any other airport in the United Kingdom due to a geographical anomaly, Glasgow Prestwick has the reputation of being "Britain's only fog-free airport". For this reason it is often used as a diversionary airport when weather conditions close aviation hubs elsewhere in the United Kingdom - heavy snowfall in the recent severe winters of 2009 and 2010-2011 resulted in large numbers of intercontinental flights bound for London Heathrow and elsewhere to be diverted to Prestwick. This is perhaps one reason it managed to avoid total closure when it appeared that BAA were running down operations. It was also partly a political decision to silence those that questioned why Glasgow needed two airports when Glasgow Corporation had already invested money building Glasgow International Airport.

Glasgow Prestwick Airport is considered to be the only piece of United Kingdom territory on which Elvis Presley ever set foot, when the United States Army transport plane carrying him home stopped to refuel in 1960, whilst en route from Germany.[4][5] A lounge bearing his name and a marker reflecting this event were inaugurated in 2006.

However, on 21 April 2008, during a BBC Two radio interview with Ken Bruce, theatre impresario and chairman of Everton FC, Bill Kenwright, said that Elvis Presley actually spent a day in Britain, being shown around London by Tommy Steele in 1958.[6] Steele later confirmed the story but expressed his sadness that it was now public knowledge, saying "I swore never to divulge publicly what took place and I regret that it has found some way of 'getting into the light'."[7]

In response, Mark Rodwell, chief executive of Prestwick Airport, told BBC Radio Scotland, that until it was proved otherwise Prestwick Airport remains the only place in the United Kingdom that Elvis Presley ever set foot. He added: "There is photographic evidence to prove that Elvis was here on March 3rd 1960, however we are not aware of any photographs of this alleged visit to London, while the timing of it also seems a bit vague."[8]

Prestwick Airport also used to host a bi-annual airshow, the first of which was held on 30 September 1967. While very small in scale compared to such shows as RAF Fairford or Farnborough, the air show was a local attraction and drew a considerable crowd. There were constant rumours in later years that the SR-71 Blackbird reconnaissance aircraft would make an appearance, but this came to nothing, most likely due to difficulties associated with handling the special fuel. The last air show was in 1992.

A new Prestwick World Festival of Flight has been organised, with the first annual event taking place between 30 August and 8 September 2013. It has been funded by the South Ayrshire Council, Prestwick Airport itself, and a number of local aerospace companies, including BAE Systems and UTC. The Prestwick World Festival of Flight will include an "air pageant" and a static aviation display. 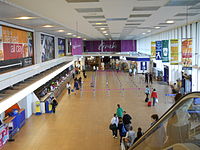 In 1991 the newly privatised British Airports Authority, BAA Limited, consolidated their portfolio of UK airports. Part of this was to move all transatlantic traffic departing from Scotland to Glasgow International Airport, near Paisley, and sell Prestwick off to the private sector. In the early to mid-1990s passenger figures fell sharply with only freight traffic and a small number of charter flights using Prestwick on a regular basis. At this point the airport faced an uncertain future.

1992 marked the beginning of a renaissance for the struggling airport when purchased by "Canadian entrepreneur"[9] Matthew Hudson in a "dramatic rescue".[10] Hudson took the move of building the airport's own railway station on the existing Ayrshire Coast Line (Glasgow–Ayr), which runs straight past the airfield, making the airport the first in Scotland to have its own railway station.[11] In her book about Prestwick Airport, South Ayrshire councillor Ann Galbraith writes about this tough time in the airport's history, saying that "if it hadn’t been for Matthew Hudson the airport wouldn’t be here today".[10] Then, Irish budget airline Ryanair opened a route to the airport from Dublin. This led to another route to London the following year. The resulting rapid growth of European no-frills airlines in the late 1990s saw Prestwick grow even larger than it had ever been, in traffic terms, under state ownership. In 1998, Matthew Hudson sold Prestwick Airport to Stagecoach.[12]

Today, Ryanair now serves more than 20 destinations from Prestwick—now one of their maintenance hubs – and other budget airlines have also moved into the airport. As well as the thriving no-frills segment, Prestwick has continued its traditional strategic role as a refuelling point for military aircraft – the USAF, RAF and the Canadian Forces Air Command are frequent visitors for example. Cargo traffic has also become another stronghold of Prestwick with the vast majority of Scotland's Boeing 747 Freighter traffic entering via the airport. On 5 September 2009 the A380 approached and took off from the airport

Since 2007 the airport has occasionally been used by BBC motoring TV show Top Gear as the location for various stunts and experiments. The best known was a scene similar to one featuring in the film Casino Royale and featured both a Ford Mondeo and a Citroën 2CV parked behind the engines of a Virgin Atlantic Boeing 747-400, in an experiment to investigate whether the thrust from the aircraft's four jet engines really could lift a car off the ground.[13]