Livingston is a town that straddles the border of West Lothian and Midlothian, a new town designated in 1962. Livingston is some 15 miles west of Edinburgh and 30 miles east of Glasgow; neighbouring it are the towns of Broxburn to the north-east and Bathgate to the north-west.

The town was built around a collection of small villages, Livingston Village and Livingston Station (now part of Deans) in West Lothian and Bellsquarry in Midlothian. It has a number of residential precincts or areas. These include Carmondean, Craigshill, Howden, Dedridge, Ladywell, Knightsridge, Murieston, Adambrae, Deans, Deer Park and Eliburn. The core locality of Livingston is defined by the General Register Office for Scotland (GRO) as including Uphall Station and Pumpherston.

Until 1963, Livingston was a village and the area surrounding it was open farmland. The ancient village is now called Livingston Village. The name for the new town was taken from this village and dates back to 12th century when a Flemish entrepreneur called De Leving was granted land in the area. He built a fortified tower (which is long since gone) and the village which grew up around it became known as Levingstoun, Layingston[2] and eventually Livingston. 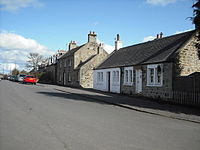 A road in Livingston Village

The village is first mentioned in an early 12th Century charter as Villa Levingi ("Leving's town"). In 1128 David I granted the newly founded Abbey of Holyrood control of and the income from the church at Livingston in a charter that was witnessed by Turstani filii Levingi ("Thurstan Levingsson"). He built a fortified tower (the Peel of Livingston) which is long since gone and the settlement that grew up around it became known as Levingstoun, Layingston and eventually Livingston.

The Earls of Callendar and the Earls of Linlithgow bear the family name Livingston, and trace their lineage back through Thurstan of Levingston to his father Leving of Levingstoun. One genealogy traces it further back to a Baron de Leving who is believed to have accompanied St Margaret from her birthplace in Hungary to the court of Edward the Confessor in England and on to her exile in Scotland. Other sources regard Leving as a Flemish entrepreneur.

In 1898 Livingston had several houses a Church of Scotland Church, a United Free church and a School. A mile north of the village there was Livingston railway station which was in a settlement called Livingston Station but is now called Deans.

The area around Livingston was previously an important shale oil area; The world's first oil boom occurred in West Lothian. This was based on oil extracted from shale, and by 1870 over 3 million tons of shale were being mined each year in the area around Livingston. Output declined with the discovery of liquid oil reserves around the world in the early 1900s, but shale mining only finally ceased in 1962. The "bings" that characterise oil shale mining in West Lothian have largely been flattened.

In 1898 Livingston had several houses, a Church of Scotland church, a United Free church and a school. Around a mile north of Livingston there was a railway station in a settlement called Livingston Station which is now part of Deans. 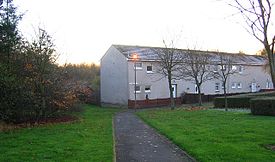 Livingston was built under the New Towns Act of 1946, in part to ease overcrowding in Glasgow. Livingston was the fourth new town of five in the Central Lowlands: the others were East Kilbride, Glenrothes, Cumbernauld and Irvine.

Livingston was officially designated as a New Town on 16 April 1962.[3]

In 1984 Livingston gained a new railway station on the Shotts Line called Livingston South which was followed by Livingston North on the Edinburgh to Bathgate Line in 1986. These stations replaced the former Livingston and Newpark stations which had closed before the construction of the town.

In 1995 Livingston gained its professional football team, Livingston FC which was essentially the relocation of Meadowbank Thistle FC from Edinburgh.

In order to build, manage and promote Livingston a quango organisation was formed, the Livingston Development Corporation.[4]

The corporation guided Livingston until its mandate expired on 22 March 1997[5] and the town was transferred to West Lothian Council. The last major construction operation carried out by the LDC was the Almondvale Stadium, which was to become the home to the renamed Livingston FC. A new purpose built campus for West Lothian College and other major developments have also taken place in Livingston over the last 10 years.

The districts which make up Livingston include: 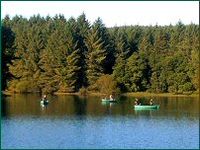 The area where Livingston now sits was historically dominated by oil shale mining, which is evident from the bings which still exist on much of the surrounding landscape. The designation of Livingston in the 1960s attracted new light industries to the area, with high technology and pharmaceutical companies moving into the town. Livingston formed a major hub in Scotland's Silicon Glen. Like most other areas this went into a slow decline with the closures of companies including Motorola and NEC. Several multi-national companies still have factories in the town and British Sky Broadcasting has its main call centre in Kirkton and is the largest private sector employer in Livingston and West Lothian. Other large employers include those in the retail sector and the National Health Service.

Livingston's new town centre sits on the southern edge of the Almond Valley on the Midlothian side of the town. It is bounded by a ring road and has been purposely planned. Howden Park is located immediately north of the town centre.

The Centre was completed in its current guise on 16 October 2008. The total development has around 155 shops and eating establishments. The Centre has a winter garden, an outdoor restaurant area, and several famous chains, a multiplex cinema, a gym, bars, restaurants and cafés as well as around 100 outlet stores.

Livingston's town centre also contains a large number of offices. Private sector offices are also concentrated at the eastern and western edges of the centre and along the Almondvale Boulevard. Other facilities in the centre include hotels, a swimming pool and local authority gym, restaurants, pubs and Club Earth. Almondvale Football Stadium and West Lothian College are at the north-western edge of the town centre. 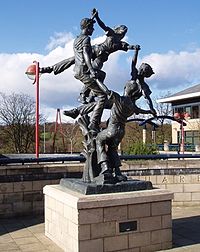 Neighbourhood Shopping Centres are located at strategic points around the town. The first of these to be built was The Mall at Craigshill. This was followed by the Carmondean Centre in Deans and groupings of shops in Ladywell and Murieston.

Uniquely in Scotland, Livingston was from its formation designated an "Ecumenical Parish" in a joint initiative by the Church of Scotland, Scottish Episcopal Church, Methodist Church and the Congregational Union of Scotland (which subsequently united with the United Reformed Church). The Ecumenical Parish has six places of worship.

Apart from the Ecumenical Parish, Livingston Old Parish is a congregation solely within the Church of Scotland. There are also churches of other denominations, notably the Baptist Church (who have two congregations in Dedridge and Ladywell), the Free Church and the Roman Catholic Church.

There is a mosque in the Craigshill area of the town called Livingston Mosque and Community Centre.

Livingston has its own Air Training Corps squadron, 2535 (Livingston) Squadron (located in Craigshill) and Army Cadet Force unit (based at Dedridge). The town also has Cubs, Scouts, Boys Brigade, Brownies and Guides units, and other organisations such as the Youth Action Project (WLYAP),[7] and Firefly Youth Theatre (formerly West Lothian Youth Theatre) also operate in the area.

The Livingston Skatepark opened in 1981, at a time when most commercial skateparks were closing and was one of the most important facilities in Britain during a critical period in the development of skateboarding. It is an example of a free, unsupervised facility which achieved international status. In 2004 it was visited by the stars of the television series Dirty Sanchez, who described it as "The Best Skatepark in the world, apart from the ones in Wales".

Livingston FC, known to locals as "Livi", "The Black and Ambers", or "The Lions", are the most notable sports team in the town. They were formed in 1995 on the relocation of Edinburgh-based side Meadowbank Thistle.