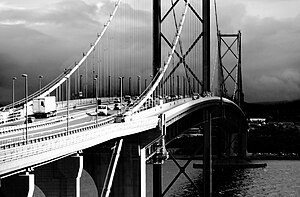 The Forth Road Bridge is a suspension bridge spanning the Firth of Forth, between South Queensferry in West Lothian to North Queensferry in Fife. It replaced a centuries-old ferry service to carry vehicular traffic, cyclists, and pedestrians across the Forth; rail crossings are made by the adjacent and historic Forth Bridge. It was itself replaced by the new Queensferry Crossing on 5 September 2017.[1] This allowed the Forth Road Bridge to be closed for repairs and also for realignment work on the approach roads to enable its new role as a "public transport corridor"; it was re-opened, for buses, taxis, cyclists and pedestrians only, from 1 February 2018.[2]

The bridge will also be used for other traffic in special circumstances, such as roadworks on the Queensferry Crossing, as happened in late November 2017.[3][4][5] 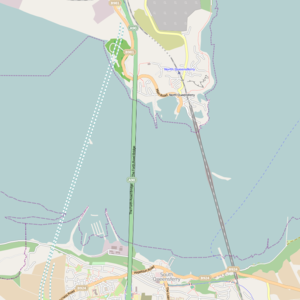 The first crossing at what is now the site of the bridge was established in the 11th century by Margaret, queen consort of King Malcolm III, who founded a ferry service to transport religious pilgrims from Edinburgh to Dunfermline Abbey and St Andrews.[6] Its creation gave rise to the port towns of Queensferry and North Queensferry, which remain to this day; and the service remained in uninterrupted use as a passenger ferry for over eight hundred years. As early as the 1740s there were proposals for a road crossing at the site, although their viability was only considered following the construction of the Forth Bridge in 1890.[7]

The importance of the crossing to vehicular traffic was underpinned when the Great Britain road numbering scheme was drawn up in the 1920s. The planners wished the arterial A9 road to be routed across the Forth here, although the unwillingness to have a ferry crossing as part of this route led to the A90 number being assigned instead.[8]

There was a period of renewed lobbying for a road crossing in the 1920s and 1930s, at which time the only vehicle crossing was a single passenger and vehicle ferry. Sir William Denny championed the expansion of that service in the 1930s, providing and operating on behalf of the London and North Eastern Railway two additional ferries that aimed to supplement the services of the adjacent railway bridge. Their success allowed for the addition of two more craft in the 1940s and 1950s,[9] by which time the ferries were making 40,000 crossings annually, carrying 1.5 million passengers and 800,000 vehicles.

With the then newest and nearest bridge spanning the Forth (the Kincardine Bridge, built in 1936) still around 15 miles upstream, the upsurge in demand for a road crossing between Edinburgh and Fife prompted the UK Government to establish the Forth Road Bridge Joint Board (FRBJB) by Act of Parliament in 1947 to oversee the implementation of a new bridge to replace the ferry service. In 1955 the authorities on either side investigated and drew up an alternative scheme for a tunnel beneath the estuary. This was known as the Maunsell Scheme, and was projected to run somewhat closer to the rail bridge than the present road bridge. The scheme was abandoned as being too ambitious and reverted to a bridge concept.[10]

The final construction plan was accepted in February 1958 and work began in September of that year. Mott, Hay and Anderson and Freeman Fox and Partners carried out the design work and a joint venture of Sir William Arrol & Co., Cleveland Bridge & Engineering Company and Dorman Long constructed the bridge at a cost of £11.5 million, while the total cost of the project including road connections and realignments was £19.5 million. Seven lives were lost during construction before the bridge was opened by Queen Elizabeth II and the Duke of Edinburgh on 4 September 1964.[11] The ferry service was discontinued as of that date. The bridge's management was delegated to the FRBJB, and remained so until 2002 when its operation was transferred to a new body with a wider remit, the Forth Estuary Transport Authority.[12] 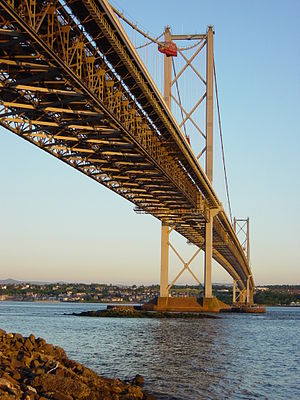 The Forth Road Bridge, viewed from the Fife side 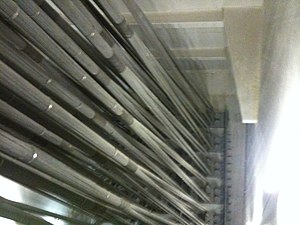 The Forth Road Bridge anchorage chamber, north side 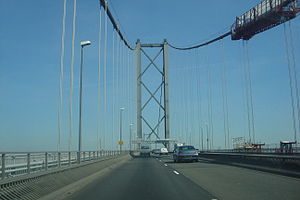 High-tensile wires suspending the deck of the northbound carriageway.

The bridge's central main span is 3,300 ft long, its two side spans are each 1,340 ft long, and the approach viaducts are 827 ft on the north side and 1,437 ft on the south side. At a total length of 8,240 ft, it was the longest suspension bridge span outside the United States and the fourth-longest span in the world at the time of its construction. The bridge comprises 39,000 tons of steel and 25 million gallons of concrete. The towers reach 512 ft above mean water level. Its width comprises a dual carriageway road with two lanes in each direction bounded by cycle/footpaths on each side. The main strung cables are 23 inches in diameter and each cable carries 13,800 tons of the bridge's load suspended by 11,618 high tensile wires, each five millimetres in diameter.[15][16]

It was awarded Historic Scotland's Category A listed structure status in 2001.

Initially, it was suggested that tolling would cease once the original cost of construction plus the accrued interest was repaid - this occurred in 1993 and it was planned that tolls would not be levied after May 1995. However, the legislation enabling the levying of tolls was instead renewed by Parliament on three separate occasions in 1998, 2003 and 2006.[19]

Originally, a toll was paid for each direction of travel with sets of toll booths on both carriageways. In 1997, a decision was made to double the northbound toll (then 40p, to 80p) and remove the southbound toll. The belief was that almost all traffic makes a return journey across the bridge, and that the removal of the southbound toll would result in a reduction of congestion for southbound traffic without reducing overall toll revenues.

The Forth Estuary Transport Authority (FETA) justified the continued use of tolls by suggesting they were necessary to fund maintenance and improvement works. These included the construction of defences around the submerged piers forming the bases of the main towers in the event of collision in the Firth. The main towers were also strengthened with internal steel columns (the original tower structure was hollow) and had hydraulic rams jack up these sections to transfer a portion of the load to the new steelwork. Also, the vertical cables suspending the deck had their bolts replaced after a single detected failure. A new paint system required development for the bridge (the original was phased out due to environmental concerns).[20] 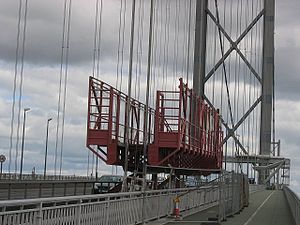 An inspection of the integrity of the cables underway on the bridge.

There has been concern at FETA over the structural wear-and-tear of the bridge. The planned theoretical capacity for the bridge (30,000 vehicles per day in each direction) is routinely exceeded as traffic levels have outstripped predictions. FETA predicted that traffic could rise to an average of 40,000 vehicles per day in each direction by 2010, while the Scottish Government stated that 60,000 vehicles travel on more than half the days in a year.[21] This raised concerns about the lifespan of the bridge, originally planned at 120 years.[21]

2003 saw an inspection programme launched (at a cost of £1.2 million) to assess the condition of the bridge's main suspension cables after excessive corrosion was discovered in a number of older bridges in the United States of a similar design and size. The study, which was completed in 2005, found that the main cables had suffered an estimated 8-10% loss of strength. Future projections highlight the likelihood of an accelerating loss of strength, with traffic restrictions to limit loading required in 2014 in the worst-case scenario, followed by full closure as early as 2020.[22]

Further monitoring and remedial work is now under way. An acoustic monitoring system, commissioned in August 2006, uses listening devices to monitor any further strands snapping and pinpoint their location within the main cables.

Given the significance of the findings of the first internal inspection, in November 2005 the Scottish Executive appointed Flint & Neill Partnership to audit the results. The purpose of the audit was to carry out a desk study of the findings and to advise the Scottish Executive whether those findings were reached using a process of appropriate rigour and whether the conclusions were reasonable. Flint & Neill appointed New York-based Ammann & Whitney to act as sub-consultants providing specialist advice using experience gained from inspections and assessments carried out in America. In January 2006, an audit report to the Scottish Executive concluded that FETA's consultant had performed the initial internal inspection and cable strength calculation in accordance with accepted practice in the United States and in general conformance with accepted industry guidelines published in 2004 by the National Cooperative Highway Research Programme. Flint & Neill noted that the initial investigation by FETA "was not prompted by the discovery of any concerns with the Forth Road Bridge cables but as a prudent response to the results of findings in the United States. When the original scope for this initial investigation was determined, the severity of the findings was not anticipated." The audit report suggested that traffic restrictions could be required as early as 2013.[23]

A number of options are being implemented to increase the bridge's lifespan. These include an extensive dehumidification programme to slow the rate of corrosion in the main cables by installing a system that will keep the air in the voids between the strands that make up the main cables at a humidity level of below 40%. Engineering consultants Faber Maunsell began work on the project in 2006. The works are planned to take two and a half years at a cost of £7.8 million.[24] As part of the works, some of the corroded cable strands are to be spliced.[25] 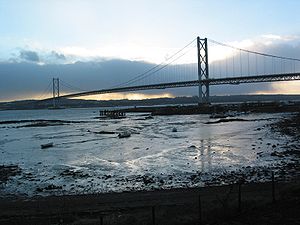 The bridge viewed from the Fife (north) side