Cambuslang is a suburban town in Lanarkshire, on the south-eastern outskirts of Glasgow. The wider parish of Cambuslang incorporates the nearby hamlets of Newton, Flemington, and Halfway.[1]

Cambuslang is known as "the largest village in Scotland", with a population of around 24,500. The town is located just south of the River Clyde and about six miles south-east of the centre of Glasgow. It has a long history of coal mining, iron and steel making, and ancillary engineering works, most recently Hoover. Tata Steel Europe's Clydebridge Steel Works and other smaller manufacturing businesses continue but most employment in the area comes from the distribution or service industries. 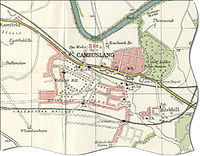 Cambuslang is on a lengthy bend on the River Clyde, southeast of Glasgow. The town is accessible from the nearby M74; the nearby A724 links to Glasgow city centre and Hamilton. The town's railway station, Cambuslang, is on the Argyle Line between North Glasgow and Lanark.

The Reverend Dr John Robertson, Minister of Cambuslang Kirk, described it, in the Second Statistical Account of Scotland 1845:

The highest points in this low-lying Parish are Dechmont Hill (602 feet) and Turnlaw (or Turnlea) Hill (553 feet). There are remains of an Iron Age fort on Dechmont. The land slopes gently downwards to the north-west to the River Clyde. The Clyde can overflow the lower parts. Dr Robertson is rather more optimistic, suggesting that:

the town is traversed by a romantic brook running into the Clyde.

He describes the course of the brook as a "romantic gorge"; this is nowadays a park.

Cambuslang is an ancient place where Iron Age remains loom over 21st-century housing developments. The local geography explains a great deal of its history. It has been very prosperous over time, depending first upon its agricultural land, (supplying food, then wool, then linen), then the mineral resources under its soil (limestone and coal, and, to some extent, iron). These were jealously guarded by the mediæval abbeys, and later by the local aristocracy, particularly the Duke of Hamilton (previously Barons of Cadzow and Earls of Arran).

Because of its relative prosperity, Cambuslang has been intimately concerned in politics (through the Hamilton connection) and of the local clergy. Bishop John Cameron of Glasgow, first minister to King James I of Scotland, and Cardinal Beaton, a later first minister, were both Rectors of Cambuslang. This importance continued following the Reformation. From then until the Glorious Revolution a stream of Ministers of Cambuslang came, were expelled, or were re-instated, according to whether supporters of the King, Covenanters, or Oliver Cromwell were in power. The First Great Awakening of the 18th century, including the Cambuslang Wark, were directly linked to similar movements in North America. The Scottish Enlightenment was well represented in the person of Rev Dr James Meek, the Minister. His troubles with his parishioners foreshadowed the Disruption of 1843 which split the Church of Scotland during the 19th century.

The manufacturing industries that grew up from the agricultural and mineral resources attracted immigrants from all over the British Isles and beyond. Cambuslang benefited at all times from its closeness to the burgeoning city of Glasgow, brought closer in the 18th century by a turnpike road then, in the 19th century, by a railway. In the 21st century, it continues to derive benefit from its proximity to Glasgow and to wider communication networks, particularly via the A74(M) and M74 motorway system.

Its increasing (and increasingly diverse) population posed problems, over the centuries, of employment and housing as well as of schooling and health, not all of which have been solved.

Cambuslang has an interesting range of churches, public buildings, schools, industrial and commercial buildings. Its domestic buildings range from 19th-century mansions, villas and tenements to modern flats and detached houses, along with sheltered and nursing homes.

Cambuslang Park spans 27 acres, encompassing the contrast of open park land and the Borgie Glen, which is a steep tree-lined ravine, containing a complex network of pathways. The park also features a pond, sport pitches, woodland areas and the Bandstand, which is a natural amphitheatre, near where the famous 'Cambuslang Wark' took place in the 18th century.