Bothwell is a small town and parish in northern Lanarkshire. It lies on the north bank of the River Clyde, adjacent to Uddingston and Hamilton, nine miles east-south-east of Glasgow city centre.

Bothwell is an affluent commuter town that has attracted a number of local celebrities including a number of Celtic and Rangers footballers. Thanks to a steady rise in property prices, Bothwell has earned its reputation as one of Glasgow's most prosperous satellites. A recent survey published in The Scotsman revealed that Bothwell's Imperial Way, site of the former home of ex-Celtic manager Gordon Strachan, is the fifth most expensive street in Scotland, closely followed by neighbouring streets Mill Road and Fife Crescent.

The Population of Bothwell is estimated, as of 2008, at 3,000. The majority of Bothwell’s residents own their own property, and annual incomes are well above average. The average house costs £556,250

The parish church (which was restored at the end of the 19th century) contains the choir of the old Gothic church of 1398. A memorial honours the poet Joanna Baillie (1762–1851) who was born in the manse. 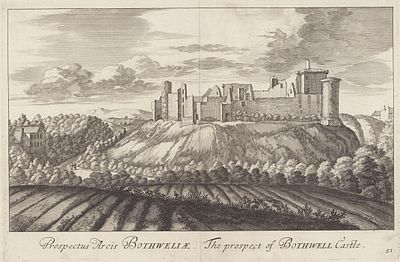 Bothwell village and its immediate surroundings east of the River Clyde were the site of three medium-sized Victorian Age collieries, Bothwell Castle, Bothwell Park and Hamilton Palace. The former two were financed by William Baird, the Coatbridge iron master, and the latter by the Bent Coal Company. Each had its collection of mining company workers houses with Bothwell Park and Hamilton Palace creating new villages. The mineral owners were the Earl of Home and the Duke of Hamilton.

The picturesque ruin of Bothwell Castle occupies a position on a bluff above a bend in the River Clyde on the edge of Bothwell, which here takes the bold sweep famed in Scottish song as the Bothwell bank. This fortress belonged to Sir Andrew de Moray, who was fatally wounded at the Battle of Stirling Bridge in 1297. It passed by marriage to the House of Douglas. The lordship was bestowed in 1487 on Patrick Hepburn, 3rd Lord Hailes, 1st Earl of Bothwell. When he resigned in 1491 the title passed to "Bell-the-Cat", Archibald Douglas, 5th Earl of Angus. The title ultimately passed to the Earls of Home.

The castle is a fine example of Gothic architecture. It consists of a great quadrangle with circular towers on the south. At the east end stand the remains of the chapel. An unpretentious mansion was built nearby by Archibald Douglas, 1st Earl of Forfar (1653–1712), and was known as New Bothwell Castle, but suffered mining subsidence and was demolished in 1926. 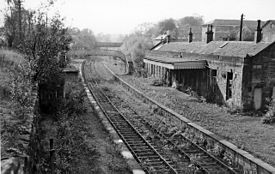 Until 1955 Bothwell had a station on the North British Railway. These are the remains in 1961

Bothwell has two primary schools: Bothwell Primary School and St Bride's Roman Catholic Primary School, golf and bowling clubs. There are several small shops and businesses in the town's Main Street, along with a handful of pubs and restaurants.

Speedway racing was staged in the Bothwell Castle estate area in the late 1940s and early 1950s. The track was constructed on old railway land by club members who used it as a training track. Occasional team matches saw the Bothwell Bulls take on other training venues such as Newtongrange and High Beech.

Tommy Miller, who had a meteoric rise to fame with Glasgow Tigers in 1950, and Ken McKinlay, arguably the best ever Scottish speedway rider, both started out at Bothwell. The venture, safety fence and all, moved to Chapelhall.

Bothwell Castle Golf Club was officially opened on the 16th of June 1923 by the Earl of Home (father of Prime Minister Sir Alec Douglas Home). The course covered a 110-acre site situated between the 13th century castle and the then small village of Bothwell.

In 1960 the club were unable to accept an offer to buy the course, which was purchased by a developer. By 1962, building proposals were in place resulting in the club losing 7 holes for housing, and having to develop new ground to replace these holes. This new section of the course opened in 1973.[4]

The club finally purchased the course in 1976 for £70,000, thereby securing its long-term future. 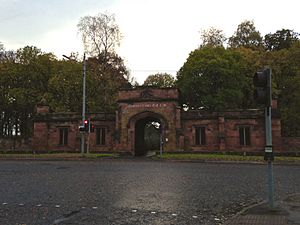 In 2002, disaster struck when a fire resulted in the complete destruction of the clubhouse. The club decided to build the replacement clubhouse in a new location closer to the centre of the course. Officially opened in October 2004 by Richard Cole-Hamilton CBE, the Captain of the R&A Golf Club of St Andrews.

In 1997, Lady Member Sheila Beckett produced a book on the history of the Club to commemorate its 75th anniversary. [5]

A flat, 18-hole parkland course with a long-standing reputation for excellent greens. Bothwell is a popular course with members and visitors alike, and is challenging for players at all levels. The building of the new clubhouse has allowed the club to revise the course layout, with several new tee positions and some new greens, making it one of the premier golf facilities in central Scotland.[6]

Brighter Bothwell is a local environmental group, formed in 2000 for the benefit of the whole community of Bothwell. Their objective is to enhance the environment directly through the endeavours of volunteers. Their approach to cleaning is "If we see things which need done to improve the appearance of our village – litter picking, dog fouling problems, graffiti removal, sustainable planting, floral displays - we organise work parties and tackle them. Our motto is ‘Let's just do it!’."

Since the formation of the group, the town is cleaner, brighter and ‘greener’. Many public areas have been improved and some major projects have been undertaken including the Nature Trail, The Jubilee Garden and The Marion Gilchrist Garden. In the Beautiful Scotland campaign, the group has raised the village to Silver Gilt award standard and, in 2012, Bothwell won the prize as winner of the Small Town category.

Brighter Bothwell has also encouraged the formation of two additional community groups, The Organic Growers of Bothwell and The Bothwell Scarecrow Festival. Working along with Brighter Bothwell, these groups are having a positive impact on the community.[7]

In the autumn of 2010 Brighter Bothwell took the initiative to support a new idea designed to extend and develop the feeling of community in Bothwell.

The new initiative was to organise a scarecrow festival, inspired by a number of wonderful festivals already held in villages across the UK. 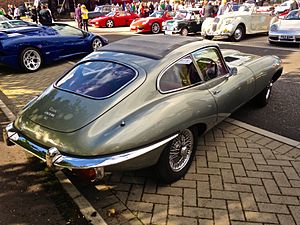 A new group was formed to set up a Community Scarecrow Festival with an agreed purpose: to promote community spirit among residents, community groups and businesses; to improve well being; and to support the local economy.

This organisation has developed into The Bothwell Community Scarecrow Festival. The first festival took place in September 2011, and subsequently every year after.

During the 2013 festival, a new event was held called 'The Scarecrow Festival of Transport' and was held at Bothwell Primary School. It was intended to be a celebration of transport throughout the ages and covered vehicles from old to new, big to small and humble to outrageous. Various people from the village donated their automobiles for the event, such as Boyd Tunnock of the local company Tunnock's and Bentley Glasgow (pictured). 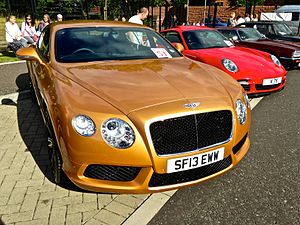 A Bentley Continental GT featured at the Bothwell Festival of Transport, as part of the Bothwell Scarecrow Festival

The festival has become very popular and the main street is filled with imaginative scarecrows from August onward. Many local businesses make their own scarecrows as do the local children whose gardens are also filed with scarecrows at the time of year. Yorkhill Children's foundation is the beneficiary of the event.[8]