Gretna Green is a village in the south of Dumfriesshire, world-famous for runaway weddings. It is found near the mouth of the River Esk and was historically the first village in Scotland, following the old coaching route from London to Edinburgh.

Gretna Green sits alongside the main town of Gretna. Both are accessed from the A74(M) motorway. 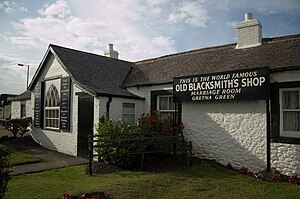 Gretna Green is one of the world's most popular wedding destinations, hosting over 5,000 weddings each year in the Gretna/Gretna Green area, and one of every six Scottish weddings.[1] 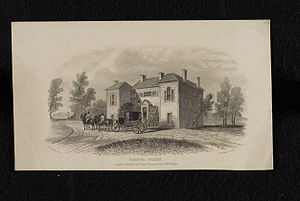 Gretna Green's famous "runaway marriages" began in 1754 when Lord Hardwicke's Marriage Act of that year came into force, but only in England. Under the Act, a marriage could only be conducted in church and a person under the age of 21 required the consent of their parents to marry. Also it required the reading of banns before the marriage. In Scotland however it was possible for boys to marry at 14 and girls at 12, with or without parental consent. It was, however, only in the 1770s, with the construction of a toll road passing through the thitherto obscure village of Graitney, that Gretna Green became the first easily reachable village over the Scottish border.[2] The Old Blacksmith's Shop, built around 1712, and Gretna Hall Blacksmith's Shop (1710) became, in popular folklore at least, the focal tourist points for the marriage trade. The Old Blacksmith's opened to the public as a visitor attraction as early as 1887.

The local blacksmith and his anvil have become the lasting symbols of Gretna Green weddings. Scottish law allowed for "irregular marriages", meaning that if a declaration was made before two witnesses, almost anybody had the authority to conduct the marriage ceremony. The blacksmiths in Gretna became known as "anvil priests", culminating with Richard Rennison, who performed 5,147 ceremonies.

One of the keenest chroniclers of the Victorian era, Robert Smith Surtees, described Gretna Green at length in his 1848, New Monthly Magazine serial, The Richest Commoner in England:

"Few of our readers—none we should think of our fair ones—but at some period or other of their lives, have figured to themselves the features of Gretna Green. Few we should think but have pictured to themselves the chaise stained 'with the variations of each soil,' the galloping bustle of the hurrying postboys, urging their foaming steeds for the last stage that bears them from Carlisle to the border. It is a place whose very name is typical of brightening prospects. The poet sings of the greenest spot on memory's waste, and surely Gretna Green was the particular spot he had under consideration. Gretna Green! The mind pictures a pretty straggling, half Scotch, half English village, with clean white rails, upon a spacious green, and happy rustics in muffin caps, and high cheek bones, looking out for happier couples to congratulate. Then the legend of the blacksmith who forged the links of love, added interest to the place, and invested the whole with fairy feature.

How much better, brighter, more promising, in short, a Gretna Green marriage sounds than a Coldstream or Lamberton toll-bar one! and yet they are equally efficacious. Gretna Green indeed, is as superior in reality as it is in name. It looks as if it were the capital of the God of Love, while the others exhibit the bustling, trading, money-making pursuits of matter-of-fact life. Though we dare say Gretna Green is as unlike what most people fancy, still we question that any have gone away disappointed. It is a pretty south country-looking village, much such as used to exist in the old days of posting and coaching. A hall house converted into an hotel, and the dependents located in the neighbouring cottages. Gretna Hall stands a little apart from the village on the rise of what an Englishman would call a gentle eminence, and a Scotchman a dead flat, and is approached by an avenue of stately trees, while others are plentifully dotted about, one on the east side, bearing a board with the name of the house, the host and high-priest, 'Mr. Linton.' There is an air of quiet retirement about it that eminently qualifies it for its holy and hospitable purpose."

Since 1929, both parties in Scotland have had to be at least 16 years old, but they still may marry without parental consent. In England and Wales, the age for marriage is now 16 with parental consent and 18 without.

Gretna's two blacksmiths' shops and countless inns and smallholding became the backdrops for tens of thousands of weddings. Today there are several wedding venues in and around Gretna Green, from former churches to purpose-built chapels. The services at all the venues are always performed over an iconic blacksmith's anvil. Gretna Green endures as one of the world's most popular wedding venues, and thousands of couples from around the world come to be married 'over the anvil' in Gretna Green.

A notable "Gretna" marriage was the second marriage in 1826 of Edward Gibbon Wakefield to the young heiress Ellen Turner, called the Shrigley abduction (his first marriage was also to an heiress, but the parents wanted to avoid a public scandal).

In 1856 Scottish law was changed to require 21 days' residence for marriage, and a further law change was made in 1940. The residence requirement was lifted in 1977.[3] Other Scottish border villages used for such marriages were Coldstream Bridge, Lamberton, Mordington and Paxton Toll.

Gretna Green appears in literature and popular fiction with great frequency, and always in connection with runaway marriages. Its greatest days in literature were the Georgian and Victorian periods: Jane Austen, Charles Dickens and many others wrote tales of runaway romances headed for this little village.