North Nibley is a village in Gloucestershire about two miles northwest of Wotton-under-Edge.

The village is commonly known as Nibley, but the fill name 'North Nibley' distinguishes it from the village of Nibley, just outside Yate, about ten miles away, also in Gloucestershire. Nibley Green is an associated hamlet to its northwest at ST732965. 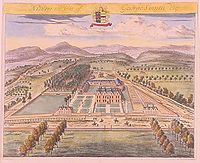 The village is the probable birthplace of William Tyndale, who translated the New Testament into English during the Reformation, for which he was later sentenced to death and burned at the stake in Flanders. Nibley House, next to the church, was the home of John Smyth (1567–1641), steward of the Berkeley Estates and historian of the early settlement of Virginia.

Nearby Stinchcombe Hill has become popular with walkers and horse riders, and is crossed by the Cotswold Way. The Tyndale Monument stands on Nibley Knoll just above the village, at ST742957 on the Cotswold Way. From 1992, volunteers have cleared the area to recreate the previously open panoramic views of both the Severn Bridges and beyond to the Black Mountains in Brecknockshire.

The village shop on Barrs Lane has been a run as a voluntary organisation by villagers since 2001.

The Nibley Music Festival, an annual event, was founded in 2007 and organised by the villagers.[1]