Sudeley Castle is a castle located in the Cotswolds of Gloucestershire, near Winchcombe. The present structure was built in the 15th century and may have been on the site of a 12th-century castle.

The castle has a notable garden, which is designed and maintained to a very high standard. The chapel, St. Mary's Sudeley, is the burial place of Queen Catherine Parr (1512–1548), the sixth wife of King Henry VIII, and contains her marble tomb. Unusually for a castle chapel, St Mary's of Sudeley is considered a church of the local Church of England parish. Sudeley is also one of the few castles left in England that is still a residence. As a result, the castle is only open to visitors on specific dates, and private family quarters are closed to the public.

It is a Grade I listed building (first listed in 1960),[1] and recognised as an internationally important structure. In March 2014 the castle opened up more private rooms, including some that had never previously been open to the public, and devised a new route through the castle and gardens.[2] 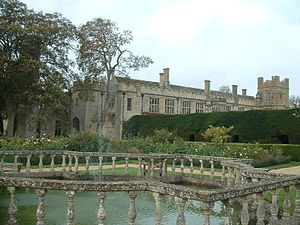 The Queen's Gardens at Sudeley Castle

A castle may have been built on the site during the reign of King Stephen (1135–1154).[3] In 1442, Ralph Boteler who was created Baron Sudeley by Henry VI, built the current castle on its present site using what he had earned fighting in the Hundred Years' War. He built quarters for servants and men at arms on the double courtyard that was surrounded by a moat. He also added state and family apartments on the second courtyard. The Chapel, which would become St Mary's, and the tithe barn were also built under Boteler.

In 1469, King Edward IV confiscated the castle from Boteler and gave it to his brother, the Duke of Gloucester, who later became Richard III. Richard used the castle as a base for the Battle of Tewkesbury. The Duke would later exchange this property for Richmond Castle making Sudeley property of the crown. Ownership returned to Richard when he became king in 1483. During his reign the Banqueting Hall with oriel windows and the adjoining state rooms, now in ruins, were built in place of the eastern range of Boteler's inner court as part of a royal suite.

After Richard's death at the Battle of Bosworth, Sudeley passed to the new king, Henry VII, who then gave it to his uncle, Jasper Tudor, Duke of Bedford. By the time Henry VIII succeeded to the throne, the castle was the property of the Crown again. In 1535, Henry VIII and his second wife Anne Boleyn visited the castle, which had been empty and unattended for some time.

When King Henry died, his son, Edward VI, gave it to his uncle, Thomas Seymour, whom he made Baron of Sudeley. In early Spring 1547, Thomas married Edward's stepmother, the Dowager Queen Catherine Parr. At the announcement of her pregnancy in late 1547, Thomas began to renovate the castle for Catherine's use, but only one room that he built remains today. Lord Seymour and Queen Catherine decided that Catherine should move to Sudeley for the final months of her pregnancy. At about six months, Catherine was accompanied by Lady Jane Grey and a large retinue of ladies to attend on her, as well as over one hundred gentlemen of the household and Yeomen of the guard. Catherine's sister, Lady Pembroke, also came and attended upon her as her chief lady and groom of the stool. Catherine would give birth to her daughter, Lady Mary Seymour, on 30 August 1548 only to die on 5 September of that year. Catherine was buried in the Chapel. Her grave was discovered in 1728 after the castle and the chapel had been left in ruins by the Civil War. She was later reinterred by the Rector of Sudeley in 1817 and an elaborate tomb was erected in her honour. 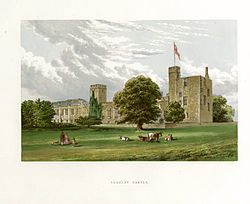 In 1549, Seymour's ambitions led to his being arrested and beheaded; after which, Sudeley Castle became the property of Catherine's brother, William Parr, Marquess of Northampton. After Parr's involvement with the plot to put Lady Jane Grey on the throne, he was stripped of his property and title by Queen Mary, who in 1554, Queen Mary gave Sudeley Castle to John Brydges, 1st Baron Chandos

William Parr would regain his titles under Queen Elizabeth, but not the castle, which remained the property of John Brydges. It was at Sudeley that Queen Elizabeth was entertained three times and in 1592 a spectacular three-day feast to celebrate the anniversary of the defeat of the Spanish Armada was held.

Mark Dent-Brocklehurst inherited Sudeley in 1949 after the death of his father. His mother decided to stay at the castle though until 1969. It was at this time that Mark and his American born wife, Elizabeth decided to open up the castle to the public.[4] It took two years to convert the home into a tourist attraction only to see the death of Mark in 1972. With this event his wife and children were beset with massive debts and death duties. It was then that Lady Ashcombe decided to take on a 20th-century renaissance of the castle. After her marriage to Baron Ashcombe, the couple made major renovations to balance a visitor attraction with what is primarily a private residence.[5] Lady Ashcombe and her children have since taken over the management of the castle as a visitor attraction.[6]

The castle is sometimes used for high-profile events, such as the 2007 wedding of the actress Elizabeth Hurley to Indian textile heir Arun Nayar, which took place in the private chapel.

In March 2014 the castle opened up more private rooms including rooms which have never been open to the public before.

These rooms form part of an extended and revamped route around the castle, which includes the '20 Treasures of Sudeley' – a collection of unique artefacts and works of art of great historical importance.

The Katherine Parr Exhibition includes rare copies of original books written by Katherine Parr, the first queen to have her own work published, are displayed in an exhibition to celebrate this remarkable queen. The exhibition also features her love letters to Thomas Seymour and the eye-witness account of the discovery of her body at Sudeley in 1782. These, together with items taken from her tomb, help to illustrate Dr David Starkey's film 'The Life and Loves of Katherine Parr, Queen of England and Mistress of Sudeley', which is shown alongside the exhibition. Guests can also visit Katherine Parr's tomb in St Mary's Church – Sudeley is notable for being the only private castle to have a queen buried in its grounds. Parr is reckoned to have been the first woman to publish a book in English in England.

The Textiles Exhibition, 'The Threads of Time', displays the castle's noteworthy textile collection, exhibition. This features a collection of textile treasures from Sudeley's history displaying textile techniques spanning over 400 years. This fine exhibition has been described as one of the best in the country and includes a 17th-century stumpwork casket, delicate lace and a Sheldon tapestry.

Sudeley Castle's has nine individual gardens. The centrepiece is the Queens Garden, so named because four of England's queens – Anne Boleyn, Katherine Parr, Lady Jane Grey and Elizabeth I – once admired the hundreds of varieties of roses found in the garden.

St Mary's Church, in which Katherine Parr is buried, is bordered by the White Garden, rich with peonies, clematis, roses and tulips, where Katherine and her companion, Lady Jane Grey would have entered the church for daily prayers. 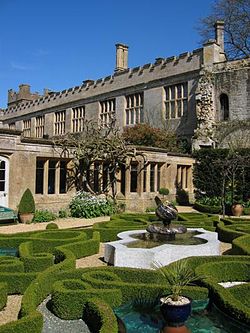 The Knot Garden is based on a dress pattern worn by Elizabeth I in a portrait that hangs in the castle. More than 1,200 box hedges form its intricate geometric design, interspersed with coloured gravel and a Moorish mosaic fountain at the centre.

The ruins of the 15th-century tithe barn form the centre of a beautiful romantic garden, featuring a tranquil carp pond surrounded by wisteria, primroses, hollyhocks and cardoons.

Other gardens at Sudeley include the Secret Garden, the Mulberry Garden and the Herb Garden Walk. In the Mulberry Garden, country flowers and cool greenery surrounds the mulberry tree planted in 1865 by Emma Dent. The Herb Garden Walk takes visitors through a fine collection of plants which have been cultivated for their medical properties for thousands of years – even though many are poisonous.

Sudeley Castle Country Cottages are located on the edge of the estate, midway between the castle and the historic town of Winchcombe. This small attractive complex of Cotswold stone cottages is set around a central courtyard with landscaped gardens and parking

The eleven cottages are all named for royal or significant people associated with the castle, and are available all year round.