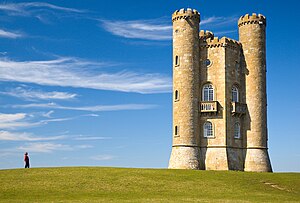 A view of Broadway Tower 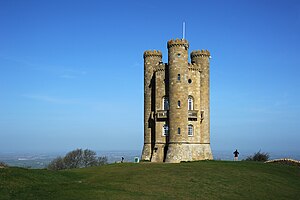 Broadway Tower is a folly on Broadway Hill, near the village of Broadway, Worcestershire,[1] at the second-highest point of the Cotswolds (after Cleeve Hill).[2] Broadway Tower's base is 1,024 feet above sea level. The tower itself stands 65 feet high.

The "Saxon" tower was the brainchild of Capability Brown and designed by James Wyatt in 1794[3] in the form of a castle, and built for Lady Coventry in 1798-99. The tower was built on a "beacon" hill, where beacons were lit on special occasions. Lady Coventry wondered whether a beacon on this hill could be seen from her house in Worcester — about 22 miles away — and sponsored the construction of the folly to find out. Indeed, the beacon could be seen clearly.

Over the years, the tower was home to the printing press of Sir Thomas Phillipps, and served as a country retreat for artists including William Morris and Edward Burne-Jones who rented it together in the 1880s. William Morris was so inspired by Broadway Tower and other ancient buildings that he founded the Society for the Protection of Ancient Buildings in 1877.

Today, the tower is a tourist attraction and the centre of a country park with various exhibitions open to the public at a fee, as well as a gift shop and restaurant.[1] The place is on the Cotswold Way and can be reached by following the Cotswold Way from the A44 road at Fish Hill, or by a steep climb out of Broadway village.

Near the tower is a memorial to the crew of an A.W.38 Whitley bomber that crashed there during a training mission in June 1943.

In the late 1950s, Broadway Tower monitored nuclear fallout; an underground ROC Corps bunker was built 50 yards from the Tower. Manned continuously from 1961 and designated as a master post, the bunker was one of the last such Cold War bunkers constructed and, although officially stood down in 1991, the bunker is now one of the few remaining fully equipped facilities remaining.