Stanton is a village of gorgeous honey-coloured cottages in the Cotswolds, at the foot of the Cotswold escarpment in northern Gloucestershire, about two and a half miles south-west of Broadway in neighbouring Worcestershire.

The village is a spring line settlement, built almost completely of Cotswold stone. Several cottages have thatched roofs. It has a high street, with a pub, The Mount, at the end.[1] David Verey calls it "architecturally, the most distinguished of the smaller villages in the North Cotswolds".[2] The Daily Telegraph described Stanton in 2017 as "arguably the most beautiful Cotswold village of them all"[3] while the Huffington Post said that it's "one of the prettiest and idyllic unspoilt villages of the Cotswolds".[4]

The parish is about three miles long, rising to its highest point is Shenberrow Hill on the Cotswold escarpment in the south-east of the parish, 994 feet above sea level. The low-lying north-western part of the parish is bounded mostly by two streams, which converge and then join the River Isbourne about half a mile outside the parish.

A report in 1712 indicated that the village consisted of 60 houses and 300 inhabitants, including 29 freeholders:[5] larger than today.

Much of the area of the village was owned by the Stott family from 1906 to 1949. In addition to restoring the properties, these owners built a reservoir in 1907, added lighting to the main street, improved the church, extended the school, built a swimming pool and cricket field.[6] Today, the village has no school, post office or shops.[7]

The Cotswold Way long-distance footpath passes through the village.[8]

Shenberrow, on the hill southeast of the village, is a hill fort enclosing about two and a half acres. It is 'bivallate', meaning that its defences include two concentric ditches. The fort was excavated in 1935, and Iron Age pottery, iron artefacts and a bronze bracelet were found. Romano-British pottery from the second century AD was also found.[9]

The fort is a Scheduled Ancient Monument.[10]

The Manor, tithes and patronage of Stanton were bestowed on Winchcombe Abbey by Kenulf, King of Mercia in 811. Most records though were destroyed in the disastrous fire at Winchcombe Benedictine Abbey in 1151[11] The manor belonged to Winchcombe Abbey until the Dissolution of the Monasteries.

After the dissolution, in 1557, the manor house was built by Thomas Warren.[12]

The manor passed to a series of owners over the descending centuries, including the architect and engineer Sir Philip Sidney Stott, who bought the estate in 1906.[13] He is credited with rescuing Stanton village from oblivion,[2] putting his fortune and skills into restoring Stanton Court and other historic buildings in the village. 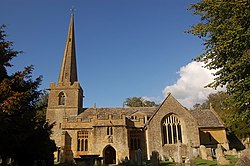 Church of St Michael and All Angels

A church was built here in around 1100.[14] the earliest remaining features are three Norman columns from about 1200 which form the north arcade. The south arcade was rebuilt with Early Gothic pointed arches, a bay longer than the previous arcade, together with a new tower of cut stone at the West end. There are hagioscopes (squints) in both transepts, an aumbry is in the north and two more in the south transept and aisle.

The font, porch and parvise are 15th-century. The original pulpit and lectern date from about 1375 and were restored in 1982. There is a second pulpit added in 1684. There are mediæval encaustic tiles at the east end.

Fragments of ancient painted decoration survive. There are fragments of mediæval stained glass in the east window, the south transept and the west window, which also shows the White Rose of York. The reredos of 1915, the rood screen and the east windows of the chancel and transepts are by Sir Ninian Comper and Squire Stott. In the north transept are murals of the Annunciation and Purification; fragments of the mediæval screen.

Still visible on the south wall is evidence of stone benches for the old and infirm, dating from when most of the congregation would stand during the parts of the service that did not require kneeling. There are mediæval benches at the back of the nave: "their poppy heads ringed with the chains of shepherds' dogs".[15] There is a wooden roundel of Mauritius Wrabury.[16]

The church is a Grade I listed building.[16] 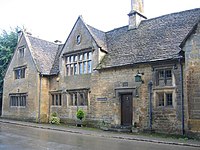 A full 43 of the buildings in this village are Listed, all as Grade II. 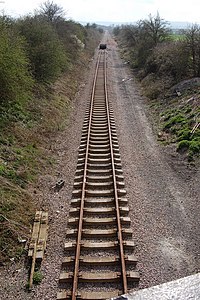 New track being laid for through Stanton parish

The Great Western Railway's main line between Stratford-upon-Avon and Cheltenham Spa Malvern Road was built through the parish between 1900 and 1904,[14] passing about half a mile west of the village. The nearest station was Laverton Halt about a mile north of Stanton. British Railways closed the line to passenger trains in 1960 and freight in 1976.

The Gloucestershire Warwickshire Railway heritage railway is rebuilding the line. By 2018, the line had reached beyond the Stanton Lane bridge.[22]