Winchcombe is a Cotswold town in Gloucestershire and home to some four and a half thousand souls. Now, Winchcombe is a modest town, pretty and well appointed, on a hill and visited more for Sudeley Castle than for itself. In the tenth century though it was the county town of Winchcombeshire, a shire wiped from the map by Earl Eadric in the eleventh century.

The earliest form of the town's name is in Old English, as Wincelcumbe ("cornered valley"). 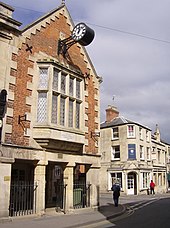 The Belas Knap Neolithic long barrow on a hilltop above Winchcombe, was constructed from about 3000 BC.

During the Anglo-Saxon period, Winchcombe was a chief city of Mercia favoured by King Coenwulf, [1] his other capitals being Lichfield and Tamworth. The Anglo-Saxon saint St Kenelm (Cynehelm) is said to be buried in the town, a prince of the Mercians martyred or just plain murdered by an ambitious relative. His shrine in Winchcombe made the town an important place of pilgrimage throughout the Middle Ages.

An Abbey was founded at Winchcumbe by Coenwulf, King of Mercia, in 811, and it was restored by Bishop Oswald in the tenth century. When the town is mentioned in the Anglo-Saxon Chronicle in 1053 it is again for the minster, recording the death of its Abbot in that year, carried off in the same month as the Bishop of Lichfield and the Abbot of Glastonbury.[2]

During the 11th century, the town was the county town of Winchcombeshire, a mysterious county, as the earliest surviving record of its existence is just 11 years before it was incorporated into Gloucestershire.

In Winchcombe and the immediate vicinity can be found Sudeley Castle and the remains of Hailes Abbey, which was one of the main centres of pilgrimages in Britain due to a phial possessed by the monks claimed contained the Blood of Christ.[3] There is nothing left of Winchcombe Abbey. 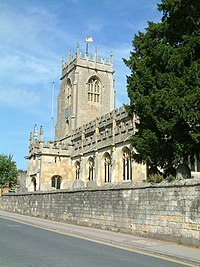 The parish church is St Peter's Church in the centre of the town. The church is noted for its grotesques.

St Peter's was built from around 1454, the height of the age of Perpendicular Gothic architecture, which gives it a pleasing uniform style, preserved when the church was restored at a number of pints in its history, particularly in the nineteenth and twentieth centuries. It is the only fifteenth-century church in Gloucestershire with an arcade with eight bays, and the only one without a chancel arch.

Walks in the hills

Winchcombe is in fine walking country amidst the rolling Cotswold Hills. It is on six long-distance footpaths: The Cotswold Way, the Gloucestershire Way, the Wychavon Way, St Kenelm's Trail, St Kenelm's Way,[4] the Warden's Way and the Windrush Way. Winchcombe became a member of the "Walkers are Welcome" network of towns in July 2009 and now holds a walking festival every May.

A community radio station was launched in April 2005 which currently broadcasts for over 14 days a year (7 days every 6 months).