Broadway is a large village and parish in the Cotswolds part of Worcestershire. Its population was 2,540 in the 2011 census, a small increase on the 2,496 in the 2001 census. It is situated in the far south-east of Worcestershire and close to the Gloucestershire border, midway between the towns of Evesham and Moreton-in-Marsh.[1] Often referred to as the "Jewel of the Cotswolds",[2] Broadway village lies beneath Fish Hill on the western Cotswold escarpment. The "broad way" is the wide grass-fringed main street, centred on the Green, which is lined with red chestnut trees and honey-coloured Cotswold limestone buildings, many dating from the 16th century. It is known for its association with the Arts and Crafts movement, and is situated in an area of outstanding scenery and conservation. The wide High Street is lined with a wide variety of shops and cafes, many housed in listed buildings.

Broadway is an ancient settlement whose origins are uncertain. In 2004, the Council for British Archaeology's Worcestershire Young Archaeologists' Club found evidence of early occupation. Their fieldwork uncovered a large amount of Roman and mediæval domestic waste and, most importantly, a large amount of worked Mesolithic flints, raising the possibility that the site might have been a stopping point for hunter-gatherers. This work makes the known history of the village to be over 5,000 years and so may be evidence of one of the first partially settled sites in the United Kingdom. Broadway has also seen the settlement of the ancient Beaker people (1900 BC), and later, the Roman occupation.[3]

Broadway was a domain of the Mercian kings and was vested in the Crown in the person of King Edgar in 967. The first existing documentary evidence of importance is embodied in a charter that King Edgar granted to the Benedictine Monastery of Pershore in 972. In this Anglo-Saxon text, Broadway is called Bradanwege and its boundaries are described in great detail. The complete copy of the charter may be seen in the British Museum (Facsimile Volume III 30).

By the 11th century the village was already well-established and apparently thriving. It is listed in the Domesday Book in Great Domesday folio 175 for Worcestershire as part of the land holdings of the Church of St Mary of Pershore: "The church itself holds Bradeweia. There are 30 hides paying geld. In demesne are 3 ploughs; and a priest and 42 villeins with 20 ploughs. There are 8 slaves. The whole in the time of Edward was worth £12 10s 0d; now £14 10s 0d."

It continued to prosper, becoming a borough by the 13th century. For Broadway this marked a considerable departure from the entirely peasant community that had existed in former times, though the following two centuries saw it decline in the wake of the Black Death. Its fortunes were revived during the late 16th century after the Dissolution of the Monasteries relieved Pershore Abbey of ownership in 1539.[4] There followed three centuries of almost unbroken growth, during which the population increased to about five times its Elizabethan level. As in other Cotswold towns, wealth was based on the wool and cloth trade.[5]

By this time the village had become a busy stagecoach stop on the route from Worcester to London. The road between Evesham and the summit of Fish Hill became a toll-road as a result of legislation dated 1728. Tolls were collected at Turnpike House, which can be found (now renamed Pike Cottage) in the Upper High Street. However, the introduction of the railways in Britain in the mid-19th century reduced the passing trade on which Broadway relied.

Broadway became home to artists and writers, including Elgar, John Singer Sargent, J. M. Barrie, Vaughan Williams, William Morris and Mary Anderson. Broadway is thought (by Sir Steven Runciman (1903–2000), a Cambridge historian who knew Benson well) to have been the model for a fictional Elizabethan village in the Cotswolds, Riseholme, the home of Lucia in the novels of E. F. Benson, before she moved to Tilling (based on Rye in Sussex).

The arrival of the motor-car at the turn of the 20th century, and the advent of popular tourism, restored Broadway's vitality, placing it now among the most frequently visited of all Cotswold villages. In 1934 J. B. Priestley published his book ‘’English Journey’’, a travelogue in which he re-visits areas of the Cotswolds, including Broadway. He described the Cotswolds as "the most English and the least spoiled of all our countrysides. The truth is that it has no colour that can be described. Even when the sun is obscured and the light is cold, these walls are still faintly warm and luminous, as if they knew the trick of keeping the lost sunlight of centuries glimmering about them."[6]

Broadway takes its name from the wide main street. In the beginning Broadway had two small brooks that ran through the village; people built on either side of the brooks, and a road formed down the middle. In the winter the mud from the road was piled up, and in the summer grass grew on the piles; these verges still remain today. 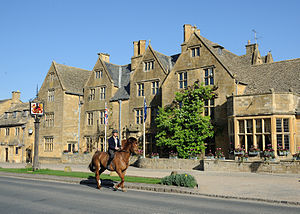 Today, Broadway is a centre for arts and antiques and serves as a natural base from which to explore the Cotswolds or see the horse racing during the busy Cheltenham Gold Cup week. Tourism is important — the village is well-served with hotels, including the Broadway Hotel, Russell's "a restaurant with rooms" and the Hotel Collection's Lygon Arms, a caravan site, holiday cottages, bed and breakfast lodges, old pubs including the Swan Inn and Crown & Trumpet, shops, restaurants and tea rooms.

Local attractions include the Gordon Russell Museum (celebrating the work of the 20th century furniture maker Sir Gordon Russell MC), the Ashmolean Museum Broadway[7] displaying objects from the 17th to the 21st centuries in ‘Tudor House’ a former 17th century coaching inn, the 65-foot-high Broadway Tower on its hilltop site in the Broadway Country Park, Chipping Campden, Snowshill village, Snowshill Manor (owned by the National Trust), horse riding and, for the many ramblers, the Cotswold Way.

The village is overlooked by Broadway Hill, the highest point in the northern Cotswolds at 1,024 ft above sea level, which is popular with hill walkers. 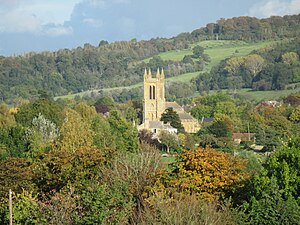 The original parish church of Broadway actually lies almost a mile outside of the village. Nevertheless, the Church of St Eadburgha has been a Christian place of worship since the 12th century and continues to be a significant aspect of village life. The dedication of a Christian church to Eadburgha is not common. Eadburgha was the granddaughter of Alfred the Great. The story is told that as a child Eadburgha was asked to choose between receiving jewels or her own Bible, she chose the Bible.[8]

The Church of St Eadburgha is listed as Grade I by English Heritage (Building ID: 400976). The current structure was built circa 1400 but there are elements that remain of the original 12th century building.[9]

The main Broadway parish church is now St Michael and All Angels. It was built in 1840 within the village of Broadway itself. It has a fine wood carved pulpit transferred from St Eadburgha.

Broadway was once served by a railway line, a relative latecomer in British railway history, opened in 1904 by the Great Western Railway and running from Stratford-upon-Avon to Cheltenham, part of a main line from Birmingham to the South West and South Wales. Broadway railway station along with almost all others on this section closed in 1960; though passenger services continued until 1968, and goods continued until 1976 when a derailment south of Toddington damaged the line. It was decided not to bring the section back into use and by the early 1980s, it had been dismantled.

Thus, although Broadway has a railway station site and a Station Road, it is no longer served by National rail services. The nearest railway stations are Evesham, Honeybourne and Moreton-in-Marsh, on the main line train service running between Hereford and London Paddington station and on the Cotswold Line between Oxford and Worcester.

The stretch between Toddington and Cheltenham Racecourse has since been reconstructed and reopened as the Heritage Gloucestershire Warwickshire Railway.

The line is now being extended northwards so that Broadway will become its current northern terminus, though nothing remains of the original Broadway railway station. However, the Broadway Area Group of the Gloucestershire Warwickshire Railway Trust is currently rebuilding the platforms, signal box and railway station buildings.

This work started in 2009, and as of April 2015, platform 1 has been completed with platform 2 almost finished. The signal box is nearing completion and planning permission has been granted for all the railway station buildings.

In addition, (although this group has since disbanded) the Stratford on Avon and Broadway Railway Society aimed to re-open the northern part of the line from Broadway to Stratford. This was a long-term project and, initially, the society concentrated on the short stretch from Honeybourne to Long Marston. Nonetheless, reaching Stratford-upon-Avon still remains the GWR Trust's main dream and official goal for the future, although no longer easily achieved due to road obstructions.