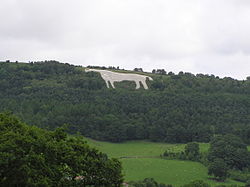 The White Horse near Kilburn - from Kilburn Village

The Kilburn White Horse is a hill figure cut into the hillside in the North York Moors National Park near Kilburn in the North Riding of Yorkshire. The figure is 318 ft long by 220 ft high and covers about 1.6 acres.[1]

Located on the southern flank of Sutton Bank, near Roulston Scar, it faces south-south-west and is visible from some distance, particularly from the East Coast Main Line railway south of Thirsk, and from the A19. On a clear day, the horse is visible from north Leeds, 28 miles away on the higher ground to the west of the Vale of York.

Sutton Bank, geologically, is formed of sandstone and the horse was created by removing the topsoil and exposing the underlying rock and covering it with white limestone chips. It was created in November 1857, and some accounts state that it was done by school master John Hodgson and his pupils, together with local volunteers. A tablet erected at the car park below it reads, "The Kilburn 'White Horse' -- This figure was cut in 1857 on the initiative of Thomas Taylor, a native of Kilburn. In 1925 a restoration fund was subscribed by the readers of the Yorkshire Evening Post and the residue of £100 was invested to provide for the triennial grooming of the figure."

However, Morris Marples in his 1949 book[2] gives Thomas Taylor the credit for being the prime mover: a native of Kilburn, he was a buyer for a London provision merchant, and he seems to have attended celebrations at Uffington White Horse in 1857, and he was inspired to give his home village a similar example. Thirty-three men were involved in cutting it, and six tons of lime were used to whiten the exposed rock.

Nowadays a car park is provided below the white horse and there is a footpath ascending past it and crossing immediately above it. The image itself is now formed of off-white limestone chips, but the steep gradient of the hillside, especially at the horse's breast and forelegs, have led to slumping and retention boards have been fixed to restrain this. 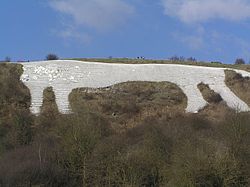 The White Horse as viewed from the car park beneath

The footpath offers a scenic view. The car park is located on a steeply graded minor road between Kilburn village and the Sutton Bank National Park Centre on the A170 road, and the best view of the white horse itself is from the Bagby road; benches are provided at the best vantage point to allow leisurely observation.

During World War II the horse was covered over to prevent it from becoming a conspicuous navigation landmark for enemy bombers. This white horse can reputedly be seen from Julian's Bower, Alkborough in Lincolnshire, over 45 miles away. 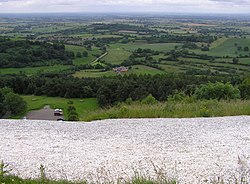 The View from the White Horse; the material forming the horse itself is at the bottom of the picture

The horse featured in the launch video for Channel 3 North East, the rebranded version of regional ITV station Tyne Tees Television, in September 1996.