From Wikishire
(Redirected from Osmotherley, Yorkshire)
Jump to: navigation, search

Osmotherley is a village and parish in the North Riding of Yorkshire. The village is the western edge of the North York Moors National Park.[2]

Osmotherley is on the route of the 110-mile Cleveland Way National Trail.

It is likely that Osmotherley means the clearing or 'ley' (pronounced lee), belonging to a Viking called 'Asmund' or a Saxon called 'Osmund'. There have been a number spellings of the Osmotherley over the centuries: the name appeared in the Domesday Book as Asmundrelac; it has also been known as Osmundeslay and Osmonderlay.

However, fanciful local legend says that Osmotherley was named after the mother of a villager named Oswald or Osmund, who supposedly went out to gather firewood in the winter. When she did not return her son became anxious and went out to look for her. He found her lying in the snow, dead or dying from the cold. Because he was not able to carry her back, he lay down beside her and died himself. It is where Oswald's mother lies, hence Osmotherley.

The village school was founded 1857, the present building dates from 1878. The school is now known as Osmotherley Primary School. It is located on School Lane and has 49 pupils.

Osmotherley boasts three pubs within a 55-yard radius: the Queen Catherine, the Three Tuns and the Golden Lion. The village was featured on BBC News]and Sky News during the Wedding of Prince William of Wales and Catherine Middleton, as it is the only village in the country to boast a pub with the name 'Queen Catherine'.

The village is served by a newsagents, a 'Top Shop' store, a fish and chip shop, a Youth Hostel and an antique store.

The public toilets are situated by the side of the Village Hall (which in turn is next to Church House, which hosts book sales and tea sales on Sundays and Bank Holidays.) These toilets have been voted the best in the UK on several occasions and are filled with flowers and decorated with pictures of horses. 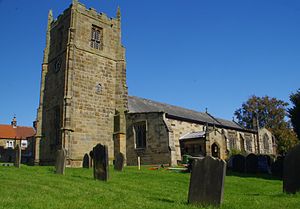 The Church of England parish church is dedicated to St Peter and is built on an earlier Saxon site, with parts of the building dating from the Norman period. Largely rebuilt by architect C. Hodgson Fowler in 1892, it is a grade II* listed building.[3]

John Wesley preached at the barter table in the middle of Osmotherley on several occasions, the first in 1745. In 1754 a Methodist Chapel was erected in Chapel Yard.

Osmotherley is also home to Osmotherley Friends Meeting House, which is a traditional stone building, erected in 1690 or 1723. Meetings are still held here once a month. It is thought that George Fox may have visited the village in the late 17th century.

Osmotherley is close to the western terminus of the Lyke Wake Walk. The official starting point is at the edge of the moors above the village, where there is a stone marker.

About 1½ miles from Osmotherley near the A19 road is Mount Grace Priory. These beautiful ruins are situated at the foot of a steep wooded hill with a footpath leading up it into the village. This Carthusian religious house was founded around 1396.

Osmotherley is the setting of some of the final chapters of the novel Brother in the Land by Robert Swindells. In the novel, many towns and cities in it are hit by individually programmed nuclear missiles, but Osmotherley's small size means it is spared.