Roseberry Topping is a distinctive hill in the North Riding of Yorkshire; an outlier of the North York Moors

It is to be found near Great Ayton and Newton under Roseberry. Its summit has a distinctive half-cone shape with a jagged cliff, which has led to many comparisons with the Matterhorn in Switzerland, if not on the same scale. It forms an emblematic image of the area.

At 1,049 feet, Roseberry Topping was traditionally thought to be the highest hill on the North York Moors;[1] however, the nearby Urra Moor is higher, at 1,490 feet. It offers views of Captain Cook's Monument at Easby Moor and the monument at Eston Nab.

The hill is an outlier of the North York Moors uplands. It is formed from sandstone laid down in the Middle and Lower Jurassic periods, between 208 and 165 million years ago, which constitutes the youngest sandstone to be found in any of the National Parks. Its distinctive conical shape is the result of the hill's hard sandstone cap protecting the underlying shales and clays from erosion by the effects of ice, wind and rain.

Until 1912, the summit resembled a sugarloaf until a geological fault and possibly nearby alum and ironstone mining caused its collapse. The area immediately below the summit is still extensively pitted and scarred from the former mineworks. The summit has magnificent views across the Cleveland plain as far as the Pennines on a clear day, some 40 to 50 miles away. 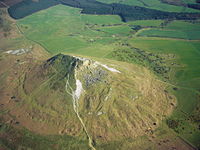 The Roseberry area has been inhabited for thousands of years and the hill has long attracted attention for its distinctive shape. A Bronze Age hoard was discovered on the slopes of the hill and is now in the Sheffield City Museum. It was occupied during the Iron Age; walled enclosures and the remains of huts dating from the period are still visible in the hill's vicinity.

The hill was perhaps held in special regard by the Norse who settled in Cleveland during Anglo-Saxon period for they gave Roseberry Topping a name first attested in 1119 as Othenesberg; “Odin's Hill”.[2] The name changed successively to Othensberg, Ohenseberg, Ounsberry and Ouesberry before finally settling on “Roseberry”. "Topping" is a Yorkshire dialect derivation of Old English topp, 'top (of a hill)'.[3]

In 1736, the explorer James Cook's family moved to Airey Holme Farm at nearby Great Ayton. When he had time off from working on the farm with his father, young James would take himself off up Roseberry Topping, which gave him his first taste for adventure and exploration, which was to stay with him for life.

Roseberry Topping can be seen from many miles away and was long used by sailors and farmers as an indicator of impending bad weather. An old rhyme commemorates this usage:

When Roseberry Topping wears a cap, let Cleveland then beware of a clap![4]

The hill was private property for many years, formerly being part of a game estate. An old shooting box can still be seen on its southern flank. Roseberry Topping is now managed by the National Trust and is open to the public. It is just within the North York Moors National Park whose border runs along the A173 road below it.

A spur of the Cleveland Way National Trail runs up to the summit. The path has been a popular sight-seeing excursion for centuries due to the spectacular views of the Cleveland area from the summit; as early as 1700, travellers were recommended to visit the peak to see "the most delightful prospect upon the valleys below to the hills above."[5]

The site was notified as a geological Site of Special Scientific Interest in 1954, with a boundary extension in 1986 bringing the designated area to 26.84 acres. The site is listed as being of national importance in the Geological Conservation Review.

During the Napoleonic Wars, the Wensleydale volunteers responded to a false alarm when the beacon on Penhill was lit in response to a supposed lit beacon on Roseberry Topping, 40 miles distant. This turned out to be burning heather.[6]

A reference to Roseberry Topping was featured in the folk-rock group America]]'s "Hat Trick" from the album of the same name. The exact lyric stanza is: