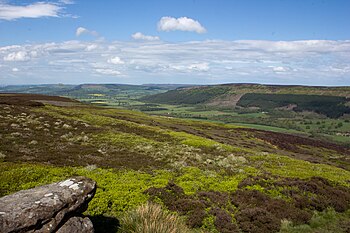 The Cleveland Hills from Urra Moor

The Cleveland Hills are a deep range of hills in the north-west of the North York Moors in the North Riding of Yorkshire, which end dramatically in the cliffs on the riding's North Sea coast. It is the cliffs which give the hills their name, from the Old Norse for 'Cliff land'.

Cleveland has long been a name attached to this part of Yorkshire, in particular along the cliff-bound coast. In the Saga of Harald Sigardsson it is recorded that King Harald landed in "the place called Cleveland" (and proceeded to burn Scarborough for resisting him). It provided the name for a mediæval and modern archdeaconry stretching along the coast from the lands beside the River Tees down to Scarborough.

The Cleveland Hills lie entirely within the boundaries of the North York Moors National Park. Part of the 110-mile long Cleveland Way National Trail runs along the hills, and it is a part of Wainwright's Coast to Coast Walk.

The hills, which rise abruptly from the flat Tees Valley to the north, include distinctive landmarks such as the cone-shaped peak of Roseberry Topping, near the village of Great Ayton – childhood home of Captain James Cook.[1]

Geological studies of the Cleveland Hills plateau date the rocks back to the Middle Jurassic age, making the range approximately 161–176 million years old,[2] although the North York Moors are formed on rocks from the Lower Jurassic age resulting in shale erosion along the north and west faces of the hills. Roseberry Topping is an outlier which was formed as a result of erosion, separating it from the Cleveland Hills formation, making it a unique natural hill.[3]

There are a number of tumuli and stone circles[4] scattered throughout the Cleveland Hills and North York Moors, dating back to the Bronze Age, as well as many cairns that are of varied ages, some of which are relatively modern. Hundreds of flint arrowheads have been discovered during excavations in the hills and dated to the Mesolithic and Neolithic periods, indication of an active population in prehistoric times across the region.[5]

Stone circles in the Cleveland Hills

In 1850, ironstone was discovered by John Marley of Bolckow and Vaughan in the Eston Hills, outliers of the Cleveland Hills, leading to mining on a large scale and the rapid growth of nearby Middlesbrough.[6][7] By the 1870s industry would be producing steel in vast amounts, and mining for coal, alum, jet, cement stone concretions, shale and potash from the hills, as well as employing sandstone and limestone quarries to gather raw materials. Many of the mines and quarries are still evident today.

The following heights are some of the highest or most notable in the range.

Towns and villages in the Cleveland Hills 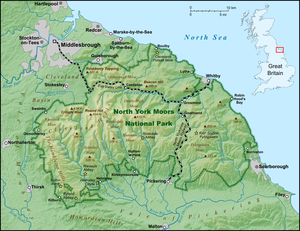 There are numerous towns and villages on, or in the vicinity of, the Cleveland Hills including the following:

Sights around the hills

On Bilsdale West Moor in the Cleveland Hills stands the 1,030-foot-tall Bilsdale transmitting station, providing 40–50 miles coverage of UHF transmissions for digital TV and radio in the north-east's Tyne Tees television region.[9] The digital switchover at Bilsdale was completed in two stages, on 12 and 26 September 2012, one of the last transmitters in Britain to complete this operation.[10]