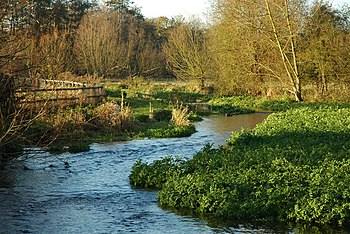 The River Chess near Chorleywood

The river rises from springs in the Vale of Chesham]] and in Pednor before flowing in a south-easterly direction past Waterside. The river banks are mostly not public rights of way, and only small stretches of the river are accessible. Beyond Latimer it flows to the north of Chenies and on towards Rickmansworth.

The Chess divides the parishes of Rickmansworth and Croxley Green, where the river flows through the Scotsbridge Mill; now a restaurant but with a river flowing through it. Soon after the mill, the Chess runs into the River Colne. It is navigable only a the canal basin in its lower reaches.

The river suffered from a severe lack of water for approximately two years between 2004 and 2006. In 2011 it dried up entirely in the upper reaches. The cause of this was believed to be a lack of rainfall. Conversely, it has been known to flood the lower lying lanes of Chesham.

The Chess Valley is one of the most attractive parts of the Chilterns Area of Natural Beauty (AONB), with a rich natural and cultural history. It supports several key species listed in the Government's UK Biodiversity Action Plan, including water vole, water rail, kingfisher, stream water crowfoot and brown trout. There is a head of coarse fish; however, this is not in abundance.

The valley has a long history of human habitation. There are a number of Roman villa sites along the valley, including Latimer Park. At Sarratt strip lynchets can be seen in terraces along the hillside made by the action of ploughing along the slope and thought to have been the site of mediæval vineyards.

Human habitation has altered the valley and the river in many ways, not all of them beneficial for wildlife. River modifications such as dredging and widening slow the current, allow silt to accumulate and smother the gravel riverbed. Changes in the land use adjacent to the river can also have impact. Water meadows have been replaced by arable fields and building developments, altering drainage patterns and causing pollution. Abstraction of water from the underlying chalk aquifer reduces river flows and lowers the river's ability to tolerate drought.

The introduction of alien species to the catchment has had a major effect on the wildlife of the river. Water vole populations declined catastrophically along the Chess between 2001 & 2003 with a 97% population decrease being observed. This population crash was caused mainly by the North American mink, a species introduced to the British Isles originally for the fur trade. In 2004 a water vole recovery project was set up by the Chilterns Chalk Streams Project, Berkshire, Buckinghamshire and Oxfordshire Wildlife Trust and the Environment Agency, combining mink control with habitat improvement to try to halt this decline. In 2005 a survey found that the water vole population had recovered to 18% of its 2001 levels.

Not all imports have quite such a catastrophic effect. Another escapee into the Chess from fish farms and trout fisheries is the rainbow trout, thought to have been introduced to the Chess in the early 20th century. They have since gone on establish one of a handful of self-sustaining populations in the UK.

The Chess is also home to a number of invasive alien plant species including Japanese knotweed, Himalayan Balsam and orange balsam.

Historically the fertile land around the Chess was ideal for growing watercress and this industry flourished in both Chesham and Rickmansworth in the Victorian era. There are watercress beds at Church End, Sarratt. Today the Chess is equally well known for trout fishing.

The Chess Valley Walk is approximately 10 miles long and links with the Metropolitan line stations of Chesham, Chorleywood and Rickmansworth giving visitors the chance to walk either part or the entire route. The route can be followed in either direction and is clearly waymarked. Most of the route is on public footpaths but there are short sections on roads. A walk leaflet is available.