Haddington Hill is a hill in the Chilterns, and the highest point in Buckinghamshire. On the north-eastern flank is Coombe Hill.

Haddington Hill is owned by the Forestry Commission, whose Wendover Woods cover much of the hill. Many tracks run through the forest, and a car park is located near the summit among the trees: the flat summit means the precise location of the highest point is difficult to determine with certainty. However, in the woods to the east of the car park there is a large stone bearing the inscription 'Highest Point of the Chiltern Hills' which can reasonably be accepted as the summit. Those looking for a view will unfortunately be disappointed as the high point is surrounded by trees.

The hill can be climbed by simply parking in the car park and walking the hundred yards or so to the large stone. However, for those who wish to climb the hill properly, a number of varied circular walks are possible.

Follow the road to the farms at West Leith, and then climb up to the wooded ridge above Hastoe. Follow the Ridgeway long-distance path around the head of a large indent in the chalk ridge until the road traversing the summit is reached. Cross it and continue to the summit. Follow a track north to the trig point, then follow Coombe Hill's east ridge down to the road west of Drayton Manor. Follow the roads back to West Leith. (eight miles.) 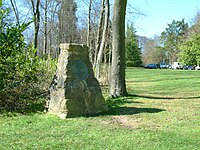 Pillar near the summit

There are two paths through the woods from Halton to the summit ridge, one either side of the military base of Halton Camp. These can be combined with the forest tracks to provide a short circular walk with a distinct lack of views. (three miles.)

Follow the Ridgeway south-east past Boswells Farm and up onto the ridge of Cock's Hill. When it turns away to the left, continue on forest tracks to the summit. Descend by way of the south-west ridge of Boddington Hill and its hill-fort. Hit a minor road and go west down to Wendover. (six miles.)

The highest point of Hertfordshire is very close by on the eastern ridge of this hill, on the road corner just west of Hastoe, at SP914091. This is a rare example of two separate county tops on effectively the same hill.