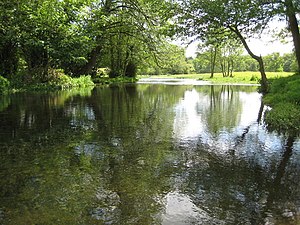 The Mimram near Poplars Green

The River Mimram is a small river in Hertfordshire which rises from a spring to the north of Whitwell, in the north of the county. It enters the River Lea near Horn's Mill in Hertford. The river has created the Mimram Valley in the midst of the county, praised for its scenic beauty in particular between Welwyn Garden City and Hertford. 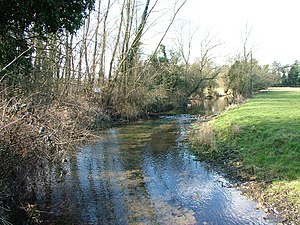 At Whitwell at the top of the river there are cress beds which have existed since Roman times and these are fed by the same springs. The valley extends northwards where it becomes known as Lilley Bottom. Other sections of the valley are known as Kimpton Bottom and Codicote Bottom.

Although a dry valley to the north, it has been known in particularly wet years for the River Mimram to be extended for several miles by springs in the upper valley. In 2001, in a neighbouring valley to the west a village was flooded.[1] The Valley is the furthest east of all the Chiltern valleys. 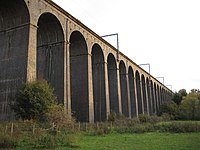 Between Welwyn and Digswell the Mimran Valley is a broad, green swathe. The railway was driven through here in the middle of the nineteenth century by the Great Northern Railway Company, but the valley proved an obstacle. The solution was spectacular: a 40-arch viaduct, completed in 1850, to carry the railway line to the north from London over the River Mimram. A contemporary newspaper report on the opening of the railway from The Times described it as:

The viaduct still served the railway and appears every bit as solid as its descrition over a century and half ago.

The river is the subject (and speaker) of a Stevie Smith poem, The River God.