Pitstone is a village in Buckinghamshire directly adjoining Ivinghoe, with which it shares facilities. The villages are at the foot of the central range of the Chiltern Hills, six miles east of Aylesbury and five miles south of Leighton Buzzard.

The village gives its name to the famous Pitstone Windmill, which stands in the fields beside the two villages, and which is in the care of the National Trust.

The elongated civil parish is semi-urban in the extreme west and is otherwise rural and elevated, rising to the opposite direction. Approximately following the north-west border is the Grand Union Canal.

The village was names in former days Pightelsthorn, with possible variation Pychelesthorn in the Please Rolls of 1399[1]

The name is form the Old English language, Piceles þorn meaning 'Picel's thorn tree'. It is recorded in the Domesday Book of 1086 as Pincelestorne. 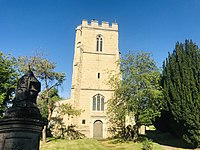 The church in the village, is St Mary's, is no longer used for worship. It stands to the south-east of the village. The earliest parts of the church are the chancel and north chapel which date from about 1250, but some carved fragments of stone dating from the 12th century indicate that an earlier church stood on the site. The church is A Grade I listed building.[2] and is under the care of the Churches Conservation Trust.[3]

Pitstone was given to the abbey at Ashridge by the Earl of Cornwall in 1283. In 1290 King Edward I spent Christmas in Pitstone at the estate that had been given to the abbey, and stayed for five weeks, during which time he held parliament in Ashridge. His stay caused great inconvenience to the local inhabitants of the village who were legally obliged to keep the king and his court.

The parish was described in a Victorian gazetteer by John Marius Wilson as: 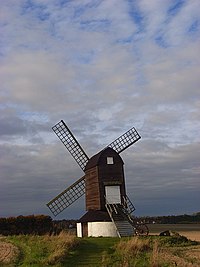 The area around St Mary's Church is known as Church End.

An area of housing and business units was named 'Castlemead' after Castle Cement Company which was the last owner of the Pitstone cement works,[6] which operated from 1937 to 1991.

The Pitstone Windmill is now owned by the National Trust. The mill was formerly capable of rotating the whole upper structure to face the wind and a long beam extends from the main structure with a wooden wheel at the end for that purpsoe, though the mill no longer rotates.

Pitstone Green Museum provides working insights into agricultural history and various supporting trades. The museum is to the south of the village proper on a farm.

Pitstone Hill, above the village, is designated a Site of Special Scientific Interest, for its botanical interest. The hill is crossed by the Ridgeway National Trail.[7] A former chalk quarry has been converted to College Lake nature reserve, a flagship reserve of the Berkshire, Buckinghamshire and Oxfordshire Wildlife Trust,[8] and the area east of the lake within the nature reserve is a geological SSSI, Pitstone Quarry.[9]