The main A4010 road runs through Great and Little Kimble, as does the Chiltern railway line between Aylesbury and Princes Risborough. The neighbouring villages are served by Little Kimble railway station: this has been in operation since 1872, although the station buildings are now a private dwelling. There is a level crossing at Marsh.

The parishes of Great and Little Kimble lie between Monks Risborough and Ellesborough and, like other parishes on the north side of the Chilterns, were strip parishes, long and narrow, including a section of the scarp and extending into the vale below.

The apparent similarity to the name Cymbeline led (probably in Victorian times) to a theory that the name was derived from his name, but it is a mere Romantic fancy. King Cymbeline (as Shakespeare called him), or Cunobelinus to the Romans, was King of the Cassivellauni tribe in the days of Julius Caesar, about 800 years before the name first appeared, with 400 years of Roman occupation and several invasions from Europe in the intervening period.

The exact reason for calling the place cyne belle is not certain. Mawer and Stenton thought that belle could have meant a hill as well as a bell and suggested that the conspicuous hill at Kimble would have impressed itself on the minds of the first settlers and might have been called 'royal' as the largest visible hill in the locality or that it earned the epithet by reason of some royal burial or other unknown event.[1] The Concise Oxford Dictionary of English Place Names, first published in 1951, interpreted the name as "Royal bell-shaped hill" and the later Oxford Companion to Names (2002) also gives that as the meaning.[2] The Cambridge Dictionary of English Place Names (2004) gives the translation "Royal Bell, the bell-shaped hill" and says that it is derived from the Old English cyne + belle, probably used as a place-name, and that the reference is to the prominent Pulpit Hill crowned with its hillfort. 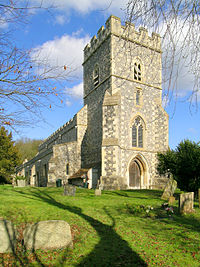 The parish church is St Nicholas, which dates from the 13th century, but possible as an expansion of an earlier church. In the middle of the 13th century the north and south aisles were added with the nave arcades and the nave may have been lengthened by one bay. In the first half of the 14th century the chancel arch was added and the chancel rebuilt. The west tower and clerestorey were added later in that century. The nave was re-roofed in the 16th century.

The font is of the late 12th century. It is a finely carved example of the local "Aylesbury" type.

The church was completely restored by J.P. Seddon in 1876–81. All the flint and stone exterior is of that date and the chancel and its aisles were rebuilt. A modern roof was built over the 16th century nave roof.[3]

A prehistoric hillfort is to be found at the summit of Pulpit Hill. A tumulus near the church is probably a prehistoric burial mound

Before the Norman conquest of England in 1066 both Great Kimble and Little Kimble were owned by royal thegns; Sired at Great Kimble and Brictric at Little Kimble. Both were dispossessed by the new king, William the Bastard. Great Kimble (Chenebelle) was given to Walter Giffard, Lord of Longueville in Normandy and a cousin of King William, who received a total of 107 lordships of land in England, 48 of them in Buckinghamshire. He subinfeudated Great Kimble to one of his own followers, Hugh of Bolbec.

By the 17th century the manor of Great Kimble was held by the Hampdens of Great Hampden. It was this in Great Kimble that John Hampden refused to pay his ship-money in 1635, one of the incidents which led to the Civil War.

In 1730 the Hampdens sold the manor to Sarah Dowager Duchess of Marlborough, whose successors sold it in 1803 to Scrope Bernard (later Sir Scrope Bernard-Morland, who was also lord of the manor of Little Kimble. After his death in 1830 the manors were sold to Robert Greenhill Russell, who lived at Chequers Court.[4]

In Pulpit Wood on the summit of Pulpit Hill in Great Kimble, about ¾ of a mile south-east of the church is a hill fort.[5] It has never been excavated and its precise date is unknown, though almost certainly built during the 1st millennium BC.

The fort follows the contours at the top of the hill and has an area of two acres. The boundary is roughly D-shaped (nearly square) with maximum internal dimensions of 340 feet x 320 feet. There are still double ramparts and ditches on the northeast and southeast sides, but on the northwest and southwest sides, which face very steep slopes down the hill, the outer rampart is hardly apparent and there is no sign of an outer ditch. The builders seem to have relied on the steep natural slopes on these sides, though the original ditches may have been eroded away.

The ramparts remain imposing after (probably) about 2,500 years. Although now mere banks of earth, they would originally been revetted with timber and boxed in, so that the faces would have been vertical.[6]

A barrow or funeral mound lies on the west side of Great Kimble church, adjoining the churchyard and fronting on Church Lane. It is known as Dial Hill (from the sundial formerly erected above it) and is believed to date from the Roman period, but has not been properly excavated, although there were limited amateur investigations in 1887 and 1950. It is scheduled as an ancient monument and English Heritage suggest that it might have held the body of the occupant of the Roman villa at Little Kimble.[7]

Griffin House School, formerly Ladymede School, an independent co-educational school, is located in Little Kimble.[8] It has a capacity of just over 100 day students from ages 3–11.