Tring is a small market town in Hertfordshire. It is in the Chiltern Hills, and gives a name to the Tring Salient; the spur of Hertfordshire projecting into Buckinghamshire along the Bulbourne valley.

Tring is at the head of the Bulbourne valley, and though the spring it north of the town the waters of the river have long since been drained to serve the Grand Union Canal, which is Tring's main waterway. The town northwest of Berkhamsted, on the course of the old Roman Road, Akeman Street, whose course is largely followed by the A41. The valley brings the road, the canal and also the rail lines to London's Euston Station. Tring railway station is about two miles from the town.

Tring is now largely a commuter town in the London commuter belt, and the centre for the Chiltern villages all around.

Tring is positioned in northwest Hertfordshire, at a low point in the Chiltern Hills, known as the Tring Gap, which has been used as a crossing point since ancient times, being at the junction of the Icknield Way and under the Romans Akeman Street, the major Roman road linking London to Cirencester. It is transected east and west by the ancient earthwork called Grim's Dyke.[1] Tring is located at the summit level of the Grand Union Canal and both the canal and railway pass through in deep cuttings. Tring railway cutting is 2½ miles long and an average of 40 feet deep and is celebrated in a series of coloured lithographs by John Cooke Bourne showing its construction in the 1830s.[2]

The four Tring Reservoirs – Wilstone, Tringford, Startops End, and Marsworth – were built to supply water for the canal. These have been a national nature reserve since 1955, and identified as a Site of Special Scientific Interest since 1987.[3]

Nearby, within the Chilterns Area of Outstanding Natural Beauty[4] that almost surrounds the town, is the Ashridge Estate, part of the National Trust, and the grand manor house housing the Ashridge Business School (where the Hertfordshire - Buckinghamshire boundary runs through the dining room).

The Natural History Museum at Tring sits at the edge of the town above the High Street, and contains an astounding collection of stuffed animals, displaying the variety of life from beetles to elephants and all in between, and such zoological experiments as across-bred polar-brown bear.

The museum was created by Lionel Walter Rothschild (2nd Lord Rothschild, 1868-1937), who took less of an interest in the family banking business as in zoology. Lord Rothschild built a private zoological museum in Tring, which housed perhaps the largest collection of stuffed animals worldwide. 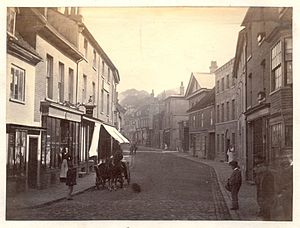 The town straddles the Roman road called Akeman Street, which runs through it as the High Street.

The Manor of Treunga is described in the Domesday Book of 1086.[1] In 1682 the mansion of Tring Park designed by Sir Christopher Wren was built for the owner Colonel Guy, Gentleman of the Privy Chamber to Charles II.[5] A later tenant was Lawrence Washington, great-grandfather of George Washington, first President of the United States of America.

In the late 19th century the estate became the home of the Rothschild family, whose influence on the town was considerable. Nathan Mayer Rothschild's son Lionel Walter Rothschild (2nd Lord Rothschild, 1868-1937) built his private zoological museum in Tring containing the biggest collection of stuffed animals in the world. The collection now forms the Natural History Museum at Tring.

The 2nd Lord Rothschild also released the edible dormouse into Tring Park. He used to ride around the town in a zebra-drawn carriage[6] and the town's symbol has been the head of a zebra ever since.

Gerald Massey (1828-1907) – poet, literary critic, Egyptologist and Spiritualist – was born nearby at Gamnel Wharf, New Mill, on the Wendover Branch of the Grand Union Canal. Goldfield Mill is a converted windmill in Tring. 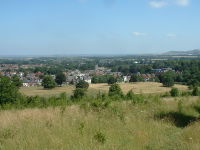 The former livestock market in Tring, redeveloped in 2005, was believed to be the last remaining example of its type in the United Kingdom. It is now the home of weekly Friday Market and fortnightly Saturday farmers Market. Some of the former livestock pens have been retained. The old livestock market office is now the home of the Tring Local History Museum, which opened in September 2010.[7]