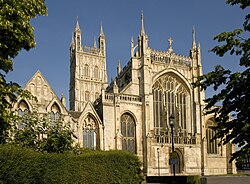 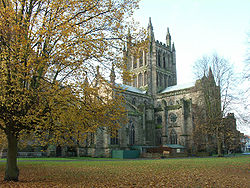 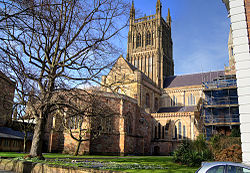 The Three Choirs Way is a long distance footpath route between three cathedral cities and county towns; Gloucester, Hereford and Worcester, and between their cathedrals.

The path also in this way links the two rivers of these three counties, the Severn, by stand the cathedrals of Gloucester and Worcester, and the Wye which runs by Hereford Cathedral.

The path has a distinctive badge on its waymarkers: a music stave and treble clef, and the motto 'Blessed is the eye between Severn and Wye'.

The inspiration behind the walk and the link between the cathedrals is the Three Choirs Festival, a music festival celebrated at the three cathedrals for over 300 years.

Each year one of the three Cathedrals takes it in turn to host the festival. The Three Choirs Festival arose, partly, from the close proximity of the three cities which has resulted in close cultural ties between them. The Three Choirs Way serves to strengthen and promote those links, by providing a glorious walk of 100 miles through the attractive and varied countryside of the three counties, evoked in the local saying about the beauty of the countryside hereabouts: 'Blessed is the eye between Severn and Wye', which appears on the waymarkers for the route.

The route links cities but is very rural, winding its way through the countryside of three counties, Gloucestershire, Herefordshire and Worcestershire, by hop-yards, vineyards and orchards. It crosses four rivers, the Severn, Wye, Teme and Lugg, and ranges of the distinctinve hills found in this part of the land, such as the Malvern Hills, the Marcle Ridge and the Suckley Hills.

Other long-distance paths which join the Three Choirs include the Worcestershire Way, the Gloucestershire Way, Wysis Way (joining the Wye to Thameshead), the Severn Way and the Wye Valley Walk.

The route is circular and may be started at any point. The guidebook starting point is Gloucester Cathedral. From Gloucester the route heads west through the village of Tibberton and, after passing Newent woods, heads north to Kilcot through gentle woodland. Dymock Wood on the route conducts another path named "the Daffodil Way", on the same path as the Three Choirs Way here. Bursting from the wood, the way crosses farmland to Much Marcle, whence it heads for Woolhope followed and then into more woods. From Mordiford the path follows the River Lugg and then the River Wye into Hereford.

From Hereford the route heads northeast for Worcester by way of Withington, Ocle Pychard, Much Cowarne and Stanford Bishop. The Way crosses the River Teme at Knightwick, passing into Worcestershire and then climbs Ankerdine Hill and drops down to Broadheath and Worcester.

From Worcester the route follows the Severn Way south for a couple of miles before heading off south west for Callow End and Malvern Link at the northern end of the great ridge of the Malvern Hills. There follows the magnificent section walking the whole length of the ridge of the Malvern Hills where the whole landscape of Worcestershire to the east and Herefordshire to the west, as far as the Black Mountains, is opened up. The ridge is followed all the way to Chase End Hill at the very southernmost point of the Malverns, and thus it enters Gloucestershire.

Next the way follows through Pendock, Staunton and Ashleworth on its final leg back to Gloucester.