The origin of the cathedral is in 678 or 679, with the foundation of an abbey dedicated to Saint Peter, an abbey dissolved only in the sixteenth century by King Henry VIII.

Until 1541 Gloucester lay in the Diocese of Worcester, but as part of the Henrician Reformation a new Diocese of Gloucester was constituted, with John Wakeman, last abbot of Tewkesbury, as its first bishop. The diocese covers the greater part of Gloucestershire, with small parts of Herefordshire and Wiltshire. The cathedral has a stained glass window containing the earliest images of golf. This dates from 1350, over 300 years earlier than the earliest image of golf from Scotland.[3] There is also a carved image of people playing a ball game, believed by some to be one of the earliest images of mediæval football. 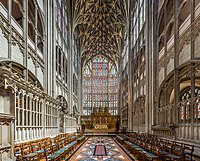 The soaring stained glass windows behind the chancel

The cathedral, built as the abbey church, consists of a Norman nucleus (Walter de Lacy is buried there), with additions in every style of Gothic architecture. It is 420 feet long, and 144 feet wide, with a fine central tower of the 15th century rising to the height of 225 feet and topped by four delicate pinnacles, a famous landmark. The nave is massive Norman with an Early English roof; the crypt, under the choir, aisles and chapels, is Norman, as is the chapter house. The crypt is one of the four apsidal cathedral crypts in Britain, the others being at Worcester, Winchester and Canterbury.

The nave looking east toward the choir

The south porch is in the Perpendicular style, with a fan-vaulted roof, as also is the north transept, the south being transitional Decorated Gothic. The choir has Perpendicular tracery over Norman work, with an apsidal chapel on each side: the choir vaulting is particularly rich. The late Decorated east window is partly filled with surviving mediæval stained glass. Between the apsidal chapels is a cross Lady chapel, and north of the nave are the cloisters, the carrels or stalls for the monks' study and writing lying to the south. The cloisters at Gloucester are the earliest surviving fan vaults, having been designed between 1351 and 1377 by Thomas de Canterbury.[4]

The most notable monument is the canopied shrine of King Edward II of England who was murdered at nearby Berkeley Castle. The building and sanctuary were enriched by the visits of pilgrims to this shrine. In a side-chapel is a monument in coloured bog oak of Robert Curthose, eldest son of William the Conqueror and a great benefactor of the abbey, who was interred there. Monuments of Bishop Warburton and Dr Edward Jenner are also worthy of note.

The cathedral has forty-six 14th-century misericords and twelve 19th-century replacements by Gilbert Scott. Both types have a wide range of subject matter: mythology, everyday occurrences, religious symbolism and folklore. 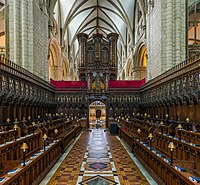 The Willis organ above the choir 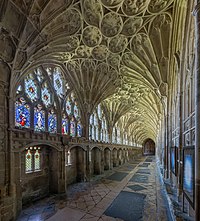 The cathedral has been used as a fiming location in a variaety of works, amongst them:

The cathedral is also used during school term-time as the venue for assemblies (known as morning chapel) by The King's School, Gloucester, and for events by the High School for Girls (Denmark Road, Gloucester), the Crypt Grammar School for boys and Ribston Hall High School. 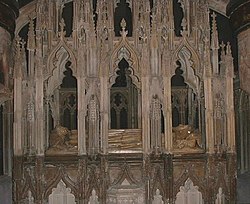