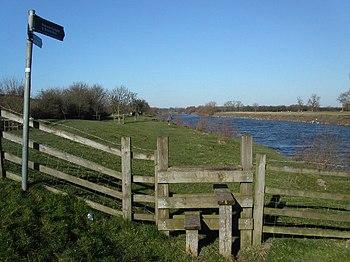 The Severn Way is a waymarked long-distance footpath which follows the course of the River Severn through five counties for 210 miles.

The route starts at the source of the Severn, high on the slopes of Plynlimon, in Montgomeryshire, and follows it down all the way to Bristol. 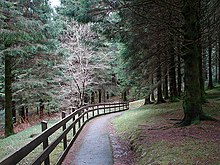 The start of the Severn Way path

The source of the River Severn is high on Plynlimon, in Cambrian Mountains and the infant river enters a woodland known as the Hafren Forest, named from the Welsh name of the river. The Severn Way begins at the mountainside source and follows the stream down through the forest.

The Way passes the cradle of the Industrial Revolution at Ironbridge before passing below Bridgnorth, Hampton Loade and Highley (in Shropshire), and passing through the south-easternmost finger of Staffordshire at Upper Arley 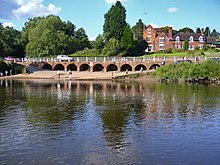 Soon, the river enters Worcestershire at Bewdley, carrying on thence to reach Stourport-on-Severn and the City of Worcester. Below Worcester, the Severn continues southwards, to Upton-upon-Severn, pursued by the Severn Way.

The river enters Gloucestershire at Tewkesbury.

Originally, the path finished at Severn Beach, but it has recently been extended to Bristol by way of Lawrence Weston, Shirehampton and through the Avon Gorge. 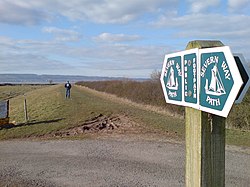