Tinto is a hill in Lanarkshire, standing at 2,335 feet at its summit. Tinto is an outlying hill of the Southern Uplands, comprising little more than this one top, which stands on the west bank of the River Clyde, some eight miles west of Biggar.

An old Scots children's rhyme tells of the "kist in the mist" at "Tintock tap": 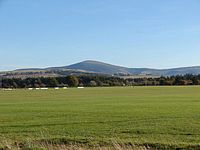 The hill is accessible for walking (moderate to difficult) and is one of the premier locations for hanggliding and paragliding. Tinto is located near the small villages of Thankerton and Wiston.

Tinto is also the venue for one of the most popular hill running races, which is held annually in November.