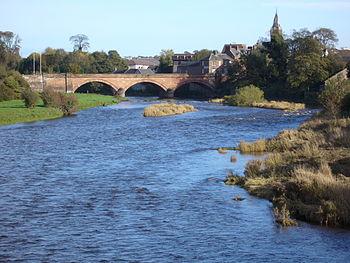 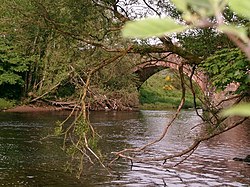 The River Annan is a river in Dumfriesshire, which rises in the Southern Uplands and runs down to the Solway Firth at the town of Annan.

The source of the Annan is at Annanhead Hill and from here flows through the Devil's Beef Tub, Moffat and Lockerbie, then to the sea, all the way carving Annandale, one of the great dales of Dumfriesshirea and a major transport route between Glasgow and the south. This is one of the region's foremost fishing rivers.

The Annan rises on Annanhead Hill five miles north of Moffat and flows through the Devil's Beef Tub where it is joined by a secondary source that rises on Hartfell. It then flows past the town of Moffat and Lockerbie to reach the sea at the fishing town of Annan.

The Annan is one of the region's foremost fishing rivers. The main fish found - and hence the target of anglers - are salmon, sea trout, brown trout, grayling and chub, with a few others such as pike. Salmon are at their best in the autumn, while sea trout are normally summer running. The brown trout season ends earlier but chub and grayling can be caught all year; all of course subject to landowners' permission.

The Annandale valley is fertile and farming is the major land use.

The etymology of the River Annan is unknown, although some sources suggest it may mean simply "water", from a Celtic language.

The Annan makes several appearances in folk songs from the Borders, and in most appears as a malevolent force, drowning those who try to cross it.

One of the most well recorded is Annan Waters. Versions of this song have been recorded by artists including Nic Jones[1] and Kate Rusby.

In online comic Gunnerkrigg Court, the Annan Waters are a river separating the Court from the Gillitie Forest, and mark the separation between technology/science and magic/nature.

Portland band the Decemberists recorded a song entitled Annan Water on their 2009 "folk opera" concept album, The Hazards of Love. (Capitol records/Rough Trade records) Appearing as track 9 of the single narrative LP, it finds our hero William on the trail to rescue his true love Margaret, only to find the raging waters of the Annan halting his progress. The song includes the plea from William to let him pass with his life, and he will gladly return to give his body to the water at a later time. This appears to work, as he is able to cross and rescue Margaret from the enigmatically titled villain of the piece, known only as the Rake. Alas, on traversing the river once again with his love, his promise becomes a reality as he and Margaret drown in the album's final track, The Hazards of Love 4 (The Drowned) in which they proclaim their love a final time and let the icy water witness their marriage. The final reflection of the album hears their proclamation that in death, "The hazards of love never more will trouble us.".[2]