From Wikishire
(Redirected from Cheviots)
Jump to: navigation, search 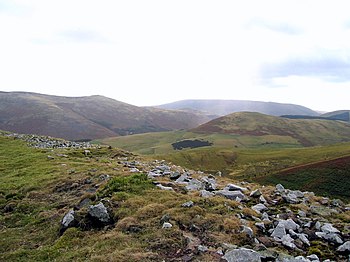 The Cheviot Hills is a range of mountains in Northumberland and Roxburghshire, which forms the northern end of the chain of hills and fells known as the Pennines. The northernmost end of the Pennine Way long-distance footpath is across the Cheviots, finally reaching its end at Kirk Yetholm in Roxburghshire at the foot of the hills.

These are rolling hills of impressive height and bleak aspect at the greatest, but amongst them beautiful dales. There is a broad split between the northern and the southern Cheviots. The former encompass most of the high ground and are pierced by five main valleys:

The southern Cheviot Hills encompass the slopes running down to the valley of the River Coquet.

To the south-west the Cheviots merge into the Kielder Forest group of hills.

Hadrian's Wall, that great Roman defensive work, runs through the southern Cheviots. There is far more history in these hills though, for they were often a bloody battleground from the Middle Ages to the end of the Tudor Age, both in the fratricidal wars between England and Scotland and amongst the reivers who ravaged the border country until King James's days. The famous epic poem The Ballad of Chevy Chase is set amongst these hills, retelling the Battle of Otterburn. 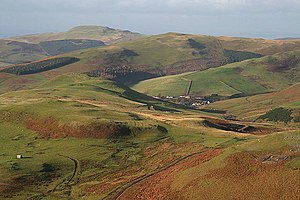 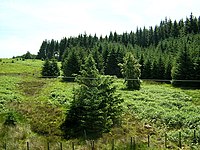 The land is all high here and in this landscape the hills generally have low relative height to one another.

Highest fells amongst the Cheviots 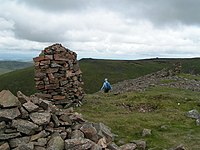 The peaks marked with a warning sign lie within the danger area of the ATE Otterburn artillery range. 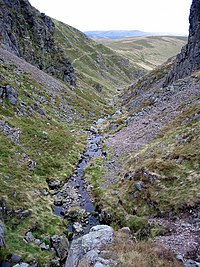 The centre of the range comprises a Devonian granite outcrop surrounded by Silurian and Devonian andesite lava flows on each side. These are in turn intruded by igneous dykes arranged radially around the Cheviot pluton. The surrounding lower ground is formed from Carboniferous Limestone though much of it is obscured by superficial deposist of Quaternary age.

The Cheviots are associated with Devonian volcanics.[1] They are arc andesites and basalts and chemistry predominantly calc-alkaline. The formation of the hills was as a result of the Avalonia - Laurentia collision during the Ordovician which subducted the Avalonian crust underneath the Laurentian plate. This created some of the large caledonian igneous provinces throughout the Highlands.

Most of the Northumberland part of the range is mapped as 'open country' and hence there is a general right to roam over it as prescribed in the Countryside and Rights of Way Act 2000. Roxburghshire enjoys the traditional rights of access of Scottish law. In addition, a sparse network of public bridleways and footpaths stretches around the area, often providing useful means of access from the lower ground onto the open hills.

The northernmost leg of the Pennine Way runs from Byrness to Kirk Yetholm. It is the longest, and most exposed, on the whole of the national trail. The Way follows the high level Border Ridge (where a fence follows the county boundary on the bleak fell height) for nearly 20 miles after the ascent to the ridge from Byrness. The terrain is boggy and remote, and two mountain refuge huts are situated on the Way for those too tired or weather-beaten to continue.

The Otterburn Army Training Estate (ATE) covers about 90 square miles of the Southern Cheviots. It is owned by the Ministry of Defence, and used for training some 30,000 soldiers a year. Otterburn is the UK's largest firing range, and is in frequent use — artillery can be clearly heard from Lindisfarne to the northeast and Fontburn Reservoir in the south.

Because of this, recreational use of the area is restricted, although it is possible for the public to use some parts of the estate subject to the relevant bylaws. The MoD publishes a booklet, Walks on Ministry of Defence Lands, which offers advice on this matter (see link below).