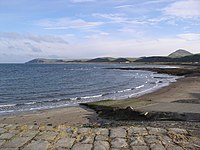 Ballantrae is a village and parish in Ayrshire. The name probably comes from the Gaelic Baile na Tràgha, meaning the "town by the beach". The village became a burgh of Barony in 1617. Near the mouth of the River Stinchar stands the ruins of Ardstinchar Castle. Its date of construction is unknown, but it was complete by the early 15th century. It fell into disuse in the early 18th century. In 1770, stones from it were used to build the Stinchar bridge, an inn and several houses.

In June 1673, while holding a conventicle at Knockdow near Ballantrae, Alexander Peden, was captured by Major William Cockburn, and condemned by the Privy Council to four years and three months imprisonment on the Bass Rock and a further fifteen months in the Edinburgh Tolbooth.

A stained glass window in the chancel of the church commemorates Elsie Mackay who perished in an attempt to become the first female transatlantic aviator. Her father, James Mackay, 1st Earl of Inchcape of Strathnaver, was the owner of Glenapp Castle on the eponymous estate[1] and flowering shrubs spell out her name on the opposite side of the glen.[2]

The beach is of the shingle and sand variety with views of Ailsa Craig, Arran and Kintyre. In fact, two streets in the village are named Arran Avenue and Kintyre Avenue.

Geologically, Ballantrae has lent its name to a subdivision of the Arenig group, which is the name applied to the lowest stage of the Ordovician System.

The town is the setting for the novel The Master of Ballantrae by Robert Louis Stevenson.

This Ayrshire article is a stub: help to improve Wikishire by building it up.