Cairnsmore of Fleet is a mountain in Galloway Hills of Kirkcudbrightshire, on the edges of Galloway Forest Park. It is home to the most extensive area of open moorland in Galloway, and has been designated as a biosphere reserve.

This is not a mountain typical of these hills; Cairnsmore of Fleet is a bold mass of land; a long, broad mountain stretching several miles from the woodland above the Palnure Burn to the crags at Door of Cairnsmore.

Cairnsmore of Fleet is a treeless granite massif, whose highest point is 2,331 feet above sea level, about six miles east of Newton Stewart. It is the highest of the "Solway Hills", and overlooks the Cree Estuary and Wigtown Bay with views as far as the Lake District, the Isle of Man and Snowdonia .[1]

The usual route of ascent is the 'Tourist Route', which is one of the most popular hikes in Galloway .[2] It starts in the south-west, near Stronord, before climbing through the Bardrochwood Moor forest on to the summit. The Cairnsmore estate, near the start of this path, is the location mentioned in John Buchan's 1915 thriller The Thirty-nine Steps .[3]

Other routes reach the summit from the south, over the Knee of Cairnsmore, and from the north, over Meikle Mulltaggart .[2] 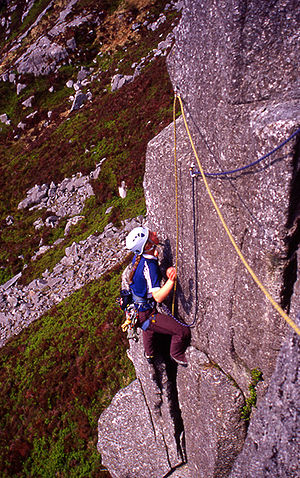 There are a number of good rock climbing areas on the subsidiary peaks around Cairnsmore of Fleet, but many of these have nesting birds on them so should be completely avoided in spring and early summer. The climbing is all on good quality granite. Areas that are described in the current guidebook [4] include Craignelder, Loch Grannoch and the Clints of Dromore.[5]

Cairnsmore of Fleet is home to many of the typical habitats of upland Britain, such as grasslands of purple moor grass (Molinia caerulea), heather (Calluna vulgaris) and bilberyy (Vaccinium myrtillus heaths and localised blanket mire with Trichophorum and cotton-grass (Eriophorum). The summit region is characterised by sheep's fescue (Festuca ovina), bilberry, Carex bigelowii and the moss Racomitrium lanuginosum .[6]

The hilltop is one of the nine biosphere reserves in the United Kingdom ,[7] having been designated in 1976 .[6] The original area of 4,749 acres was increased to 8,794 acres when the Cairnsmore of Fleet reserve was merged with the Merrick Kells and Silver Flowe nature reserve .[8]

The massif is also home to a variety of birds, mammals and invertebrates, including upland raptors such as the golden eagle, merlin, hen harrier and peregrine falcon, as well as a population of feral goats .[8][9]

Red and black grouse are managed on the estates, and there is extensive grazing by domestic sheep (chiefly Scottish Blackface) and cattle, which helps maintain habitats for birds. This has been hampered by the decline in farming of traditional breeds, such as Belted Galloway cattle, with farmers keeping breeds more suited to lowland grazing .[6]

Cairnsmore of Fleet is owned and managed by Scottish Natural Heritage .[9]