The Cheviot is the first major peak at the northernmost end of the Pennine Way long distance path, or its dramatic conclusion for a walker coming from the south. 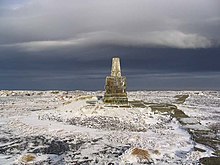 The summit of the Cheviot is very flat. It is an ancient, extinct volcano. It is covered with an extensive peat bog up to six feet deep; the Northumberland National Park authority have laid stone slabs down on the main access footpath to prevent erosion damage to the peat and to make access to the summit safer for walkers.

North of the summit, in the peat bogs, are the remains of a crashed B-17 Flying Fortress bomber, which hit the mountain due to a navigational error in the Second World War. The more recognisable pieces of wreckage have been removed, but pieces of the aircraft can still be found.

A secondary summit known as Cairn Hill stands at a meeting of paths (NT903195) just under a mile south-west of the main summit, and standing at 2,549 feet. It is still another half-mile from here to the county border.

The cairns at the top by the Hanging Stone mark the top of Auchope Cairn, a short ridge of the Cheviot marking the border with Roxburghshire, at a local summit of 2,438 feet. This is an important ancient marker: when the border of the kingdoms of England and Scotland was drawn in the Middle Ages, the border was taken over the ridge of the hills to the Hanging Stone on Auchope Cairn and here turned north towards the River Tweed. Therefore, here the boundary of Roxburghshire with Northumberland takes a sudden acute-angled turn, and here too the Pennine Way, following it, turns north-east along Auchope Cairn, thence to run down to its northern end at Kirk Yetholm. 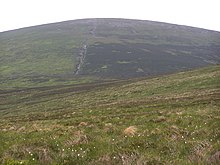 The last leg up the Cheviot

Other than the route by way of the Pennine Way, most routes up the Cheviot start from the Harthope Burn side to the north-east, which provides the nearest access by road. The summit is around three miles from the road-end at Langleeford on the Harthope Burn.

There are routes following the ridges above either side of the valley, and a route that sticks to the valley floor until it climbs to the summit of The Cheviot from the head of the valley.

Although the Pennine Way itself does a two-mile out-and-back detour to the Cheviot, many walkers who come this way omit it, since the stage (the last) is 29 miles long. 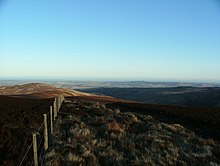 Looking toward Scald Hill and beyond

The view is from the summit itself obscured greatly by the flatness of the summit plateau. Nevertheless, on a clear day the following are visible (from west, clockwise);